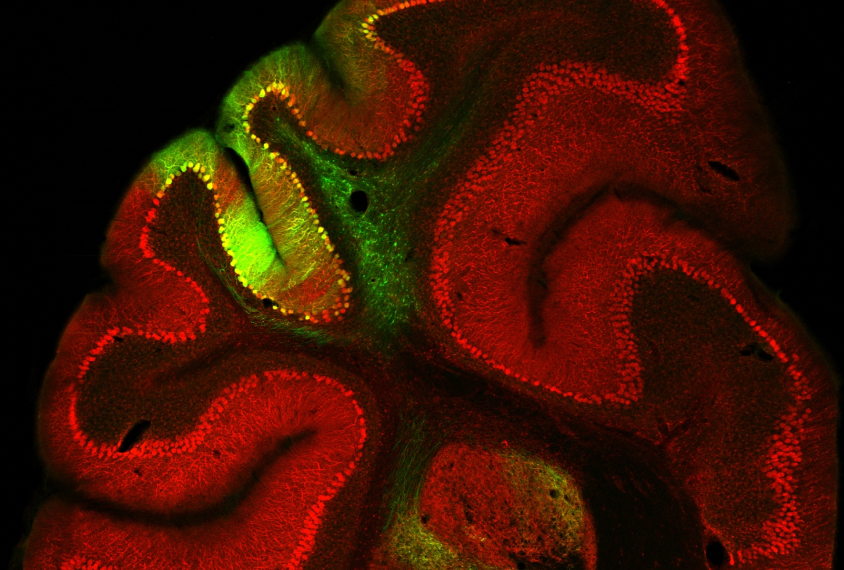 Social preference: Decreasing the activity of dopamine receptors in two regions of the mouse cerebellum, Crus I and Crus II, makes mice more sociable; enhancing activity of the receptors does the opposite.

Activity of the signaling molecule dopamine in the cerebellum plays a key role in regulating social behavior, a new study in mice reveals.

The cerebellum, a brain structure located at the base of the skull, is traditionally thought to control movement. But increasing evidence suggests that it also plays a role in social behavior and other complex cognitive functions — a connection that has sparked growing interest in the structure among autism researchers.

Dopamine signaling in other brain regions is also known to be involved in social behavior, but few studies have looked at dopamine in the cerebellum. The new study links dopamine’s social role in the cerebellum to a specific cell type in a specific region, similar to the way that functions such as language and visual processing are located in particular parts of the cerebral cortex.

The task of matching location and function in the cerebellum has been particularly difficult, which makes the work “pioneering,” says Sam Wang, professor of neuroscience at Princeton University, who was not involved in the study. “It provides some resolution to the question of how could the cerebellum possibly be involved in regulating higher functions.”

In the past, scientists had trouble mapping the location of dopamine receptors — proteins that sit on the cell surface and bind to the molecule — in the cerebellum. Not only are there relatively few of them, but experimental techniques weren’t sensitive enough to pinpoint their locations accurately, says study leader Emmanuel Valjent, research director at the National Institute of Health and Medical Research (INSERM) and the Institute of Functional Genomics at the University of Montpellier in France.

Valjent and his collaborators used two genetically engineered lines of mice to show that a particular class of dopamine receptors, known as D2 receptors, are found throughout the outer layer of the cerebellum. Specifically, the D2 receptors are primarily found on Purkinje cells, which integrate and filter information and then pass signals out of the cerebellum to other parts of the brain. Postmortem brains of people with autism show a loss of Purkinje cells.

“The dopamine is there and the function is maybe more important than we expect,” Valjent says.

Chemically stimulating the D2 receptor in mouse cerebellum slices tamped down excitatory signaling, indicating one way in which Purkinje cells do their work of modulating and integrating neuronal signaling, Valjent says. The work appeared 16 June in Nature Neuroscience.

To gain more insight into the function of dopamine signaling in the cerebellum, the researchers then used a genetically engineered virus to turn off D2 receptor activity in Purkinje cells in adult male mice.

Because of the well-known role of the cerebellum in coordination of movement, “we were expecting to find a motor impairment by manipulating the level of D2 receptor,” Valjent says. “But there was nothing there.” The mice lacking D2 receptor activity in Purkinje cells scurried about, balanced on a beam and rode on a rotating bar just as well as control mice.

The researchers were at an impasse when, in 2019, one of the first papers on dopamine in the cerebellum emerged, implicating dopamine in the deep cerebellar nuclei in social behavior. Inspired by those results, Valjent and his colleagues decided to test social behavior in the animals. Mice lacking D2 receptor activity in Purkinje cells spent more time sniffing another mouse placed in their cage than control mice did, and also showed a stronger preference for a newly introduced mouse over a familiar one.

D2 receptors are most abundant on Purkinje cells in Crus I and Crus II, regions of the cerebellum that have previously been implicated in social behavior. When the researchers manipulated D2 receptor levels in Purkinje cells only in Crus I and Crus II, it produced the same effects on social behavior as altering D2 levels in the cerebellum as a whole.

“They were able to demonstrate that the Purkinje cell expression of the D2 dopamine receptor was not just necessary and sufficient in the entire cerebellum to alter these behaviors, but really in that focused area,” says Erik Carlson, assistant professor of psychiatry and behavioral sciences at the University of Washington in Seattle. “That is really surprising; that is really deep and really powerful.”

Because D2 receptors are also found elsewhere in the cerebellum and in cell types other than Purkinje cells, however, “they haven’t ruled out the possibility that there are other cells that are involved in this function of dopamine,” Wang says.

Valjent and his team are now investigating cerebellar D2 receptors in the brains of several mouse models of autism, including mice lacking the genes FMR1, MECP2 and SHANK3.