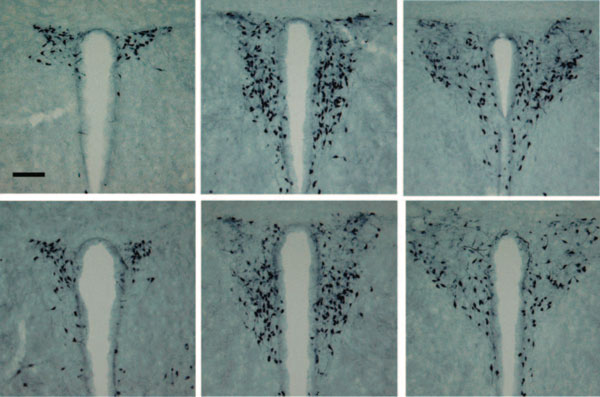 Oxytocin has been tenuously tied to trust, monogamy and a slew of other social behaviors. It has also long been eyed as a treatment for autism, but trials in people with the disorder have yielded conflicting results. A new study, published 21 January in Science Translational Medicine, bolsters the case for the so-called ‘trust hormone’ as an autism therapy, finding that it eases social deficits in a mouse model of the disorder1.

“There is no drug approved for treating social deficits [in autism],” says Olga Peñagarikano, assistant researcher in Daniel Geschwind’s lab at the University of California, Los Angeles. “We don’t think oxytocin is going to be effective in everybody, but I think it will be very interesting to find a way to determine [who] could benefit.”

The study is the first to rigorously examine the effects of oxytocin treatment in an autism model, in this case mice lacking the CNTNAP2 gene. The mice show little interest in other mice, a social deficit reminiscent of those seen in autism. But 30 minutes after a single injection of oxytocin, the mice approach others in their cage.

The mice also have low brain levels of oxytocin, suggesting that people who have autism and mutations in CNTNAP2 have a similar deficit — and may similarly respond to oxytocin treatment.

“This paper is exciting, because they’re looking at a potential therapeutic agent — in this case oxytocin — which is already being tested in human beings,” says Robert Malenka, professor of psychiatry and behavioral sciences at Stanford University in California. “We can start delving into the detailed mechanisms [in mice] in ways you can’t do in [people].”

In the new study, the researchers used young mice to test five drugs known to affect social behavior. A single injection of either oxytocin or vasopressin eases social deficits, they found. Further experiments revealed that vasopressin in fact acts through the oxytocin pathway.

The most intriguing finding is that oxytocin has no effect on social behavior in control mice, says Peñagarikano. The mutant mice have fewer neurons that make oxytocin and low levels of the hormone in the brain. No other mouse models of autism — except for mice that model the related fragile X syndrome — have shown this pattern5.

“CNTNAP2 doesn’t represent all of autism, but it’s one little slice,” says Larry Young, professor of psychiatry at Emory University in Atlanta, who was not involved with the study. “This points to the fact that in some slices of autism, oxytocin is not affected at all and stimulating the oxytocin system won’t have an effect. In other slices, it will.”

To directly link the improved social behavior to oxytocin in the brain, the researchers stimulated the hormone’s release in two other ways: injecting a drug called melanocortin that stimulates oxytocin release and using artificial receptors, called DREADDS, to activate oxytocin neurons. Both methods improved social functioning.

In traditional approaches, “no one even knows if oxytocin gets into the brain or if it leads to effects through some other weird way,” says Robert Froemke, assistant professor of physiology and neuroscience at New York University, who was not involved in the study. “The use of DREADDS to engage the oxytocin system is a major advance.”

To test the effects of long-term oxytocin treatment, the researchers injected mouse pups with oxytocin every day between 7 and 21 days of age, when the mice wean from their mothers. Nine days after stopping the treatment, the mice continue to show a boost in brain levels of oxytocin and improvements in social behavior. “It would be very interesting to see how long this effect lasts,” says Peñagarikano.

She and her colleagues plan to test whether oxytocin has the same effect on adult mice. “Maybe there’s a developmental window that would be optimal for treatment,” she says.

These and other experiments may reveal exactly how oxytocin affects the brain long term, notes Sue Carter, professor of biology at Indiana University in Bloomington, who was not involved with the study. “If you understand the mechanism, then you can use it to inform treatment rather than just giving something and hoping it won’t have adverse effects.”