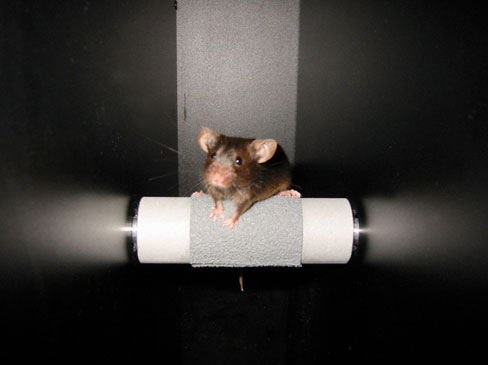 Motor mice: A drug being tested for Rett syndrome does not improve performance on the rotarod in a mouse model of the disorder.

Motor mice: A drug being tested for Rett syndrome does not improve performance on the rotarod in a mouse model of the disorder.

Mouse studies of a promising treatment for Rett syndrome, already in clinical trials, offer a note of caution about the drug’s potential. Preliminary findings from the research, presented Sunday at the Society for Neuroscience annual meeting in New Orleans, show why mouse work remains important even after clinical trials are underway.

A second study, also presented Sunday, shows that a different form of the same drug is harmful to mice at high doses.

Rett syndrome is caused by mutations in the MeCP2 gene, and primarily affects girls. It is characterized by repetitive hand movements, motor deficits, respiratory problems and features of autism.

Researchers at Children’s Hospital Boston are conducting a clinical trial of insulin-like growth factor 1 (IGF-1) for treating Rett syndrome. The same form and dose of IGF-1 being used in the trial only partially reverses symptoms of Rett syndrome in a mouse model of the disorder, according to one of the new studies.

Researchers led by Mriganka Sur, professor of neuroscience at the Massachusetts Institute of Technology, administered daily injections of IGF-1 to the mutant mice, beginning when the animals were 14 days old (equivalent to a prepubescent girl in terms of IGF-1 levels).

Sur’s group designed the study in collaboration with the clinical trial team, in part to help interpret the trial results. Researchers can study how the drug works at a molecular level in mice in a way they can’t in people.

The researchers found that IGF-1 restores the function of synapses, the junctions between neurons, that are disrupted in mice lacking MeCP2. It significantly improves breathing and heart function in the animals, and lengthens their lifespan compared with untreated mutants. But it doesn’t improve their performance on the rotarod, a test of motor coordination and learning.

The partial recovery is not entirely surprising, says Jorge Castro, a postdoctoral researcher in Sur’s lab who presented the poster. “The brain has a very heterogeneous distribution of IGF-1 receptors,” he says, so the molecule is unlikely to have equally powerful effects everywhere in the brain.

Overall though, the results raise hope that IGF-1 will help treat Rett syndrome. “It suggests an increase in the quality of life for the girls, but maybe not a complete recovery,” Castro says.

Still, the results are somewhat deflating after the intense excitement surrounding early studies of IGF-1, others say.

Sur led a 2009 study showing that the IGF-1 ‘tripeptide,’ an abbreviated form of the molecule that consists of just three amino acids, dramatically — though still not fully — reverses symptoms of Rett syndrome in mice lacking MeCP21.

The researchers launched the clinical trial with the full-length version of IGF-1, consisting of 70 amino acids, because it is already approved as a treatment for short stature.

The new study is the first to assess the effects of the full-length peptide in the mouse model at a dose relevant to the clinical trials. “[The result is] much less dramatic with the full-length peptide than it was in their first paper,” says Jeffrey Neul, associate professor of molecular and human genetics at Baylor College of Medicine in Houston, who was not involved in the work.

Neul led another study, also presented in a poster on Sunday, in which mice lacking MeCP2 were given PEGylated IGF-1, a slow-release form of the molecule. This version of the drug would require injections only twice a week, compared with the daily regimen of the clinical trial.

To their disappointment, the researchers found that a low dose of PEGylated IGF-1 has little effect, and high-dose injections shorten the animals’ lifespan. The treated mice live for just 65 days on average, compared with 94 days for untreated mutants.

Neul is preparing a clinical trial of Rett treatment with the tripeptide, the form of IGF-1 that yielded the promising initial results in mice. The small molecule includes the amino acid glutamate, and may block glutamate signaling in some neurons, which could help alleviate the seizures seen in Rett syndrome.

“I wonder if the tripeptide itself may have more interesting properties than the full-length molecule,” Neul says.

Correction: This article has been modified from the original. It has been corrected to say that 14-day-old mice are equivalent to a prepubescent girl in terms of IGF-1 production, and to clarify that the small molecule blocks glutamate signaling, rather than improve it.