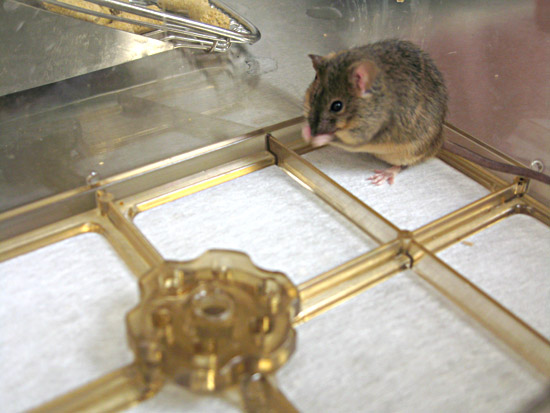 Researchers are tinkering with mouse models to investigate the function of a protein that helps wire neurons together and that has repeatedly been linked to autism. Three such reports of the protein, neuroligin-1 (NLGN1), have appeared this year.

The most interesting of these studies, published in February in the Journal of Neuroscience, found that mice that lack NLGN1 excessively groom themselves. This abnormality disappears when the mice are given D-cycloserine, a drug used to treat people with fear and anxiety disorders1.

Another report, published in March, finds abnormally low levels of NLGN1 in mouse models of fragile X syndrome, which is characterized by mental retardation and, often, autism2. Finally, a February study shows that too much NLGN1 impairs memory formation in mice3.

Neuroligins sit at the receiving end of a synapse — the connection between neurons — and their interactions with other synaptic proteins allow electrical signals to pass from one neuron to the next. The new NLGN1 reports highlight the importance of these proteins for building fully operational synapses, which are required for healthy cognitive function.

“We want to know what all the neuroligins do in the brain,” says Craig Powell, lead investigator of the grooming study. “If there is some common theme among the various neuroligin mutants, that might be a treatment target in autism.”

Researchers first linked this family of proteins to autism in 2003, when a genetic screening of families with autism turned up mutations in the NLGN3 and NLGN4 genes4.

Two subsequent studies implicated NLGN1, which is found exclusively at excitatory synapses that use the glutamate neurotransmitter to signal other cells. One study reported that in a family with autism, affected relatives are more likely to carry specific single nucleotide variants in the NLGN1 gene than are controls5. Another study found that duplications of the gene are more likely to crop up in individuals with autism than in healthy controls6.

Although researchers have not yet found deletions of the NLGN1 gene in people with autism or related disorders, other kinds of variations in the gene could similarly halt production of the protein. This prompted Powell and colleagues at University of Texas Southwestern Medical Center to look closely at mice engineered to lack NLGN1.

In addition to the increased grooming, Powell found that the mutant mice have irregularities in synapses in the striatum, a brain region that has been associated with repetitive movement disorders.

Several groups have studied mice lacking NLGN17,8, but the new report is the first to thoroughly examine the animals’ behavior. The researchers used 14 different tests to evaluate, among other things, social interaction, spatial learning, motor coordination and anxiety levels.

Within a span of 10 minutes, NLGN1-knockout animals spend 56 seconds grooming themselves, twice the duration of normal mice. “It’s not so noticeable to the casual observer, but when you videotape them and score it, it’s double,” Powell says.

Since that finding, three other autism mouse models have shown repetitive behaviors: two with increased self-grooming9,10and one with excessive jumping11.

Still, the increase in grooming in Powell’s model is only a few seconds per minute, notes Sheryl Moy, associate professor of psychiatry at the University of North Carolina at Chapel Hill, who reported the mice that jump excessively. If Powell’s mice were truly modeling autism, she says, their repetitive behaviors might be more pronounced.

The mice have other behaviors that are reminiscent of autism. For example, they have trouble remembering the location of a previously learned target, a deficit that resembles the cognitive impairments of some individuals with autism.

But the mice show relatively normal social behaviors, in contrast to mice that lack either NLGN3 or NLGN4, which have been found to have abnormal interactions with other mice12,13.

To display the full extent of symptoms found in autism, NLGN1 mutations may need to co-occur with other genetic variants or environmental factors, Moy says.

Powell’s team found that excitatory synapses in the mutant mice’s dorsal striatum, a region involved in grooming, are surprisingly sluggish: the electrical signals passing through one kind of receptor for the neurotransmitter glutamate are 30 percent lower than those in normal mice.

Boosting the signals with D-cycloserine, which partially activates these receptors, restores the mice to normal grooming behavior.

Although the reversal suggests a potential treatment strategy, Moy calls it a preliminary finding. It could be that the mutants groom less often because they are sensitive to the drug’s side effects, such as, perhaps, sedation. Moy says she has stumbled across such genotype-specific side effects by monitoring the movements of mice under the influence of a drug. Powell’s study did not include this kind of control.

A 2004 pilot study of D-cycloserine in people with autism did not find any improvements in repetitive behaviors; however, with only 12 participants, the study was too small to provide firm conclusions14.

Still, finding a way to boost these synaptic signals may be the right approach. A report published last year found that NLGN1 is important for synapse maturation, which suggests that the excitatory synapses in Powell’s model may not have reached their full signaling potential15.

That study found that neurons from mice lacking NLGN1 form under-developed synapses in culture: the presynaptic end of the synapse holds fewer neurotransmitter-containing vesicles than normal, and it hasn’t yet developed a mature protein scaffold that keeps the synaptic components in place. This suggests that NLGN1 can expedite distinct developmental events on the other side of the synapse that profoundly affect how the synapse works.

Consistent with this, the February study that over-expressed NLGN1 in mice found an increase in the number of mature-looking synapses3.

Taken together, these findings reinforce the notion that neuroligins are more than just the passive glue keeping neurons together. Instead, they seem to recruit and organize the components of the synapse.

“I believe that cell-adhesion molecules fine-tune synapses,” says Thomas Dresbach, a neuroscientist at the University of Heidelberg who led the vesicle study. The events contributing to synapse maturation are subtle and technically difficult to detect. But, Dresbach says, “They may turn out to be major factors underlying autism.”