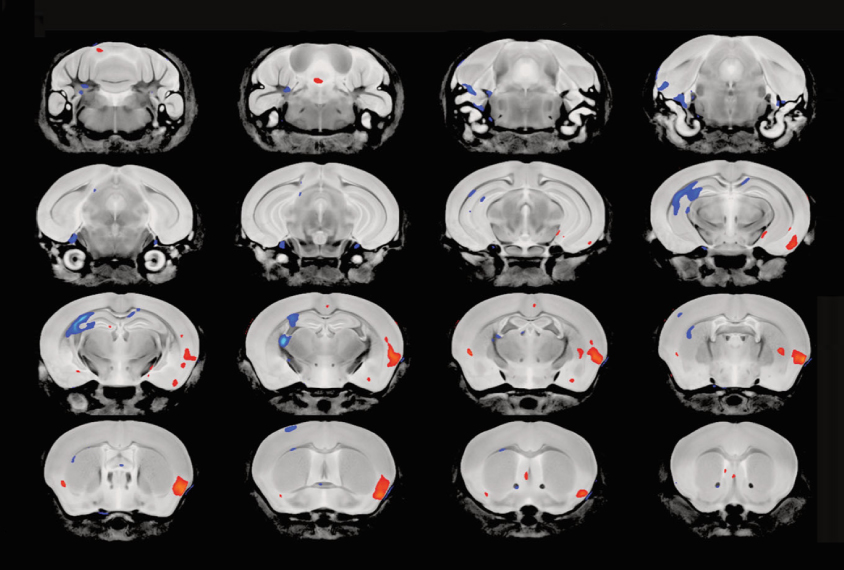 Out of shape: Brain regions in mice missing a copy of SETD5 may be bigger (red) or smaller (blue) than those in controls.

Two independent sets of mice missing a copy of SETD5, a top autism gene, link the gene to the condition’s traits.

Findings from the mice, in two studies published in the past two months, solidify SETD5’s role in autism.

One study shows that neurons from mice missing SETD5 make fewer connections than usual1. The other suggests that losing the gene alters gene expression during brain development and disrupts learning and memory2.

“These two papers are crucial to increase our confidence that this is really a causative gene,” says Alysson Muotri, professor of pediatrics and of cellular and molecular medicine at the University of California, San Diego. Muotri led one of the studies, which appeared 17 January in Translational Psychiatry.

Researchers first reported SETD5 mutations in 2014 in seven people with intellectual disability, five of whom have autism or features of the condition3. As of May, SETD5 mutations had been seen in 42 people; about one in four of these people has autism traits4.

In mice, the mutations lead to changes in brain and behavior that partly mimic those seen in autistic people, Muotri says.

The two sets of mice recapitulate different aspects of the condition, however: Muotri’s mice have social deficits, hyperactivity and memory problems, and show changes in particular brain regions and neurons; the other mice are unusually small and have communication and memory problems, but seem otherwise mostly typical.

This mismatch raises questions about exactly how SETD5’s loss leads to the abnormalities seen in the mice, says Adrian Bird, Buchanan Professor of Genetics at the University of Edinburgh in Scotland, who was not involved in either study. “There’s quite a lot yet to do to nail down those mechanisms.”

Do I know you:

Muotri and his colleagues obtained their mutants from another team and analyzed the mice’s brains and behavior. They found that adult mutants show the usual preference for interacting with another mouse over an object but have trouble distinguishing a novel mouse from a familiar one. The mice are also hyperactive, anxious and have poor spatial memory.

The mutants’ brain volume and the overall size of various brain structures is in the typical range. But three regions within the cerebral cortex that are linked to autism are larger in the mutants than in controls.

A deep layer of the cerebral cortex is also unusually thin in the brains of the mutants at 1 or 10 days old. When grown in culture, certain neurons from this layer are smaller and have shorter branches and fewer synapses; they also fire less frequently and less synchronously.

“They see most of their deficits in that specific cell type, which is really quite interesting,” says Annie Vogel Ciernia, assistant professor of biochemistry and molecular biology at the University of British Columbia in Vancouver, Canada, who was not involved in the study. “How does that [cell type] contribute to the behaviors, and is there a way that you could potentially target it therapeutically to reverse some of the problems?”

Muotri’s team plans to test drugs that might enhance communication among the neurons.

In the other study, published in December in Nature Neuroscience, researchers made mice missing one copy of SETD5. The newborn mutants are unusually small, and many have small, misshapen eyes and displaced teeth, the team found. These features resemble those of some children with SETD5 mutations. Isolated mutant pups are less likely than controls to call out to their mothers — echoing the communication difficulties seen in autism.

Genes involved in head and brain development are unusually active in 9-day-old mutant embryos, whereas other genes are unusually inactive. Many of the latter genes are part of a signaling pathway called WNT, which is linked to autism. The brains of the mice seem otherwise normal; they are of a typical size, and neurons in the embryos develop in the expected numbers and at a typical rate, for example.

Adult mutants show few signs of autism’s core features but do have learning problems: They have trouble remembering which holes in a cage provide access to water. By contrast, they remember painful stimuli (such as a light shock to the foot) all too well and have trouble forgetting the experience.

An abnormal response to stimulation among neurons in the hippocampus, the brain’s memory hub, could underlie the mice’s memory problems, the team found.

The researchers also discovered that SETD5 influences gene expression by interacting with two other proteins, PAF1 and HDAC3, that make up part of protein complexes known to turn genes on or off.

“Several members that compose those complexes also have mutations that have been associated with autism,” says co-lead investigator Gaia Novarino, assistant professor at the Institute of Science and Technology in Klosterneuburg, Austria. “This is all an emerging pathway that is linked to autism.”

Novarino’s team is investigating whether reinstating SETD5 in mutant mice after birth can reverse some of their features.