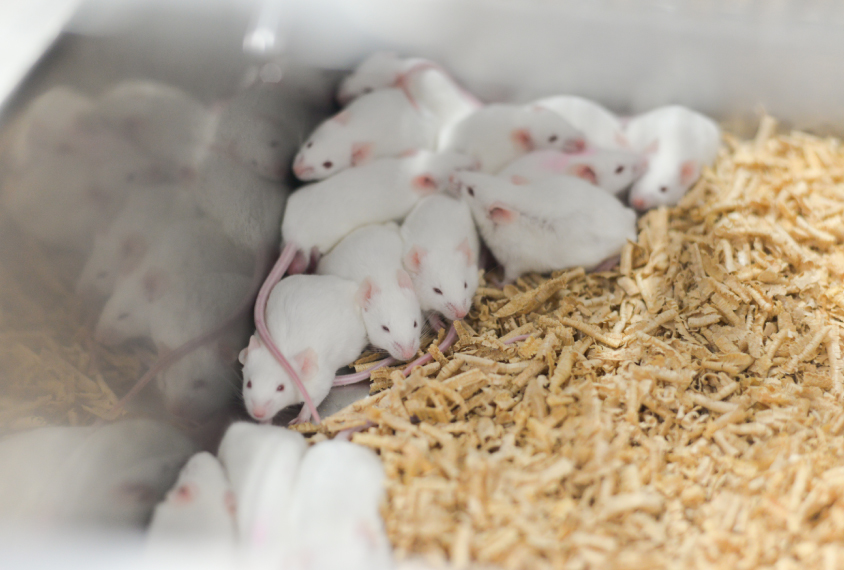 Like-minded: An algorithm groups mouse models of autism based on links between the volume of the cerebellum and cerebrum.

Five mouse models with disruptions to an autism-linked pathway have patterns of cerebellum connectivity that parallel those seen in some autistic people, according to a new brain imaging study. The results point to a potential molecular mechanism for atypical cerebellar development in autism, according to the researchers, who presented the findings today at the 2022 International Society for Autism Research annual meeting. (Links to abstracts may work only for registered conference attendees.)

The cerebellum, perched at the base of the skull below the larger cerebrum, is best known for shaping motor function, although researchers increasingly recognize that it contributes to other abilities, such as language and social skills.

It has been unclear which molecular pathways contribute to the atypical patterns of cerebellar development seen in some autistic people, says Felipe Morgado, a medical and doctoral student in Jason Lerch’s laboratory at University of Toronto in Canada, who presented the work.

To try to find out, Morgado and his colleagues first analyzed MRI brain scans from 402 neurotypical children, 351 autistic children and 207 children who had other neurodevelopmental conditions, such as attention-deficit/hyperactivity disorder and obsessive-compulsive disorder. They obtained the scans from a data repository called the Province of Ontario Neurodevelopmental Disorders (POND) Network.

The team measured the volume of various cerebellar regions and evaluated each region’s pattern of correlation with the volume of the cerebrum — a measure that reflects broad differences in brain connectivity, Morgado says.

Children with autism or other neurodevelopmental conditions, the researchers found, differed most strongly from their neurotypical peers in the patterns of correlation found between the cerebrum and posterior regions of the cerebellum, including the Crus I and II regions, which have previously been linked to social behavior.

Based on the correlation differences, these same children fell into several distinct clusters, which did not differ by a child’s age or levels of autism-linked traits, the team found.

Morgado and his colleagues performed the same analysis on brain scans from 2,115 adult mice representing 81 different autism models and found three clusters — including one dominated by model mice that all have disruptions to the mTOR signaling pathway. This pathway contributes to cell growth and has been implicated in autism.

The mTOR mouse cluster showed similar correlation patterns to those of two clusters of scans from autistic children — pointing toward a potential molecular mechanism behind the cerebellar structure differences that they identified.

“Disruptions to the mTOR pathway and mTOR pathway products should be investigated as a potential driver of cerebellar connectivity differences in autism,” Morgado says, based on the results.

A previous version of this article misstated the number of children in the study with neurodevelopmental conditions other than autism.