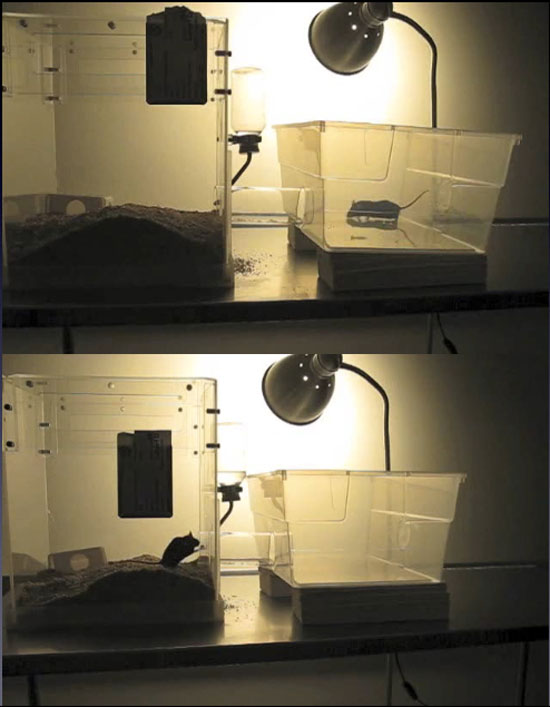 Danger mouse: Mice with the Timothy syndrome mutation (bottom) are slower to explore new environments than are controls (top).

Mice bearing the genetic defect that causes Timothy syndrome show many autism-like behaviors, and may also have enhanced cognitive abilities like those seen in a small number of people with autism, suggests a poster presented Sunday at the Society for Neuroscience annual meeting.

Timothy syndrome, a rare genetic disorder that is characterized by heart defects and often autism symptoms, is caused by a mutated calcium channel gene. Calcium channels control the flow of calcium ions into and out of cells, and are particularly important for muscle contraction and nerve-cell firing. Calcium channel dysfunction has also been implicated in autism.

There are two forms of Timothy syndrome, TS1 and TS2, each caused by a single DNA letter change in slightly different parts of the gene. In the new study, researchers created a mouse with the same mutation as is found in people with TS2. But this defect is so severe that the mice do not survive to term, the researchers found.

So the team, led by Richard Tsien, Stanford University professor of molecular and cellular physiology, used a genetic engineering tool called a neomycin cassette to decrease the expression of the mutated gene. In the resulting mice, which survive to adulthood, about 25 percent of calcium channels in the brain are abnormal.

These mice show many behaviors typical of autism. For example, says Patrick Bader, the postdoctoral researcher who presented the work, “They seem to dislike novelty.” They are less interested in other mice than normal, as shown by a new, automated method to measure social behavior, developed by Mehrdad Shamloo’s team at the Stanford Behavioral and Functional Neuroscience Laboratory. And they exhibit repetitive behavior, burying half a dozen or so marbles when control mice usually stop at two.

However, the mice do not show cognitive impairment, a common feature of both Timothy syndrome and autism. In fact, the mice seem to be especially quick learners and have a sharp memory — similar to the specific enhanced cognitive abilities seen in a small number of people with autism. “A feature of autism on the other side is this ‘savant’ syndrome,” Bader points out.

It’s rare for a mouse to model this aspect of autism. A mouse with a mutation in neuroligin-3 — a protein involved in forming connections between nerve cells and implicated in autism — shows a greater facility for spatial learning than control mice do. But some researchers say that these mice don’t exhibit the abnormal social behavior characteristic of autism.