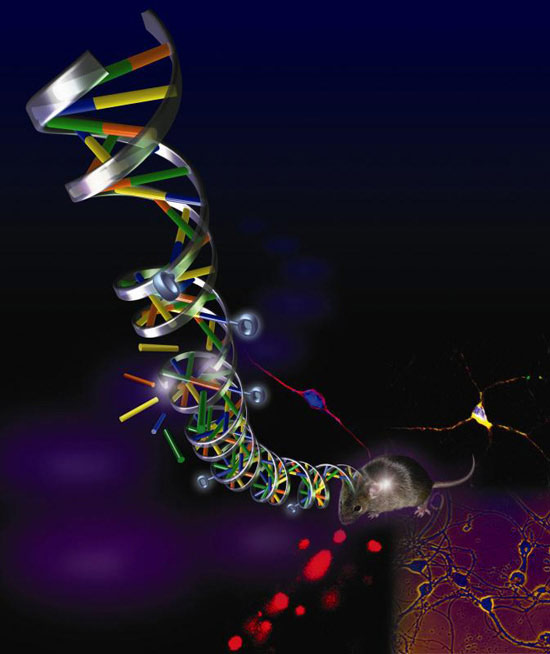 Beyond genes: Proteins that control reversible modifications of DNA may be important in autism.

Mice that lack a key regulatory protein known as MBD1 show autism-like symptoms and could serve as a model for the disorder, according to a study published online on 1 April1.

DNA sequences were thought to encode a fixed blueprint for heritable disease, but in the past few years, research has shown that ephemeral, sub-sequence level changes are capable of modifying the genetic code.

These ‘epigenetic’ shifts ― acquired throughout an individual’s lifetime ― can play an important role in aging, cancer, and mental disorders such as autism. Epigenetic changes include methylation of DNA sequences, modification of histone proteins and silencing of genes through noncoding RNA ― processes that can modify the expression of genes.

Environmental factors, such as exposure to toxins, could lead to these epigenetic changes and result in disorders such as autism.

MBDs, or methyl-CpG binding proteins, are a family of proteins that bind methylated DNA and play a central role in epigenetic gene regulation. They are so named because they recognize methylated C-G sites and bind to them.

MBDs include MeCP2, mutations in which cause Rett Syndrome2. Epigenetic changes in MeCP2 have also been linked to related disorders, including autism3.

In 2003, researchers at the University of New Mexico created mice that lack the MBD1 gene4. They report this month in Human Molecular Genetics that those mice display many of the behaviors associated with autism, including less interest in interacting with other mice than control mice show, anxiety, depression, learning deficits and abnormal serotonin activity.

The mechanism by which MBD1 mutations lead to autism-like behaviors in mice is not well understood. But, “finding mice with this phenotype opens the door for understanding how these different cognitive pathways are regulated,” says lead author Xinyu Zhao, associate professor of neurosciences at the university.

Mice with the MBD1 deletion also have higher levels of a serotonin receptor known as Htr2c. Abnormal serotonin systems have been linked to autism. The researchers found evidence that MBD1 could be a key regulator for this receptor, providing a potential explanation for the link between MBD1 and autism-like behavior.

Mice that lack MeCP2 show symptoms similar to human Rett Syndrome, including ataxia, breathing disorders and hind-limb clasping, and the animals die by the time they are around 10 weeks old. In contrast, mice with mutated Mbd1 proteins have less severe behavioral disorders and have a normal lifespan.

“This doesn’t surprise me,” Zhao says. “Rett Syndrome is a very severe disorder, whereas in many cases of autism the phenotypes are very mild learning deficits.”

A mutation in MBD1 has so far only been reported in one individual with autism5. “It’s just really a challenge for us to go find those patients,” says Jeffrey Neul, assistant professor of pediatrics at Baylor College of Medicine.

Although autism is likely to have multiple risk factors, “It may be that all of them feed into a similar network so we would be able to build up a conception of what the disease results from,” Neul says.

DNA methylation typically represses gene expression by recruiting MBD proteins to bind the DNA, and blocking the binding of activator proteins. Histone modifications such as acetylation and phosphorylation can play a variety of roles such as repairing breaks in double strands of DNA.

These epigenetic changes were once thought to be irreversible, but studies now indicate that they could be dynamically regulated6,7.

It’s too early to speculate on treatment for epigenetic factors, but the mouse models should help evaluate treatments, experts note.

“The bright side of the epigenetic pathways is that they’re more reversible than a pure genetic defect,” says Janine LaSalle, professor in the medical microbiology and immunology department at the University of California, Davis. “It offers hope that at least epigenetic pathways are a little bit more malleable than just trying to fix a broken gene.”