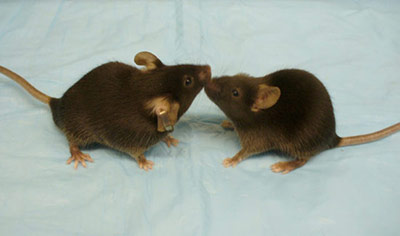 Sound of silence: Mice that have excess UBE3A in the nucleus produce fewer vocalizations when with another mouse than controls do.

Mice that express elevated levels of an autism-linked gene in the nucleus of neurons show social and communication problems, according to unpublished research presented Thursday at the Dup15q Alliance Scientific Meeting in Sacramento, California.

The mice have an extra copy of UBE3A, a key player in maintaining protein levels within cells. There are other mouse models that express high levels of UBE3A, but the new mice are the first to localize the excess protein in the nucleus, the part of the cell that contains genetic material.

“This is kind of a novel way of looking at [UBE3A function],” says lead investigator Matthew Anderson, associate professor of pathology at Beth Israel Deaconess Medical Center in Boston, who presented the work at the conference.

UBE3A is located in the 15q11-13 chromosomal region. About 1 to 3 percent of people with autism carry duplications of 15q11-13. Deletion of the 15q11-13 region causes Angelman syndrome, which involves developmental delay, seizures, lack of speech and a cheerful demeanor.

In 2011, Anderson’s team debuted mice that express two extra copies of UBE3A. These mice are less social compared with controls, make fewer ultrasonic vocalizations when they are around other mice and groom themselves repetitively, his team reported. Mice that express only one extra copy of UBE3A do not show these defects.

In the new study, Anderson’s team directed the excess UBE3A protein to the nucleus. They found that these mice also show less social interest and make fewer ultrasonic vocalizations compared with controls. They do not exhibit repetitive behavior, however.

The results suggest that excess UBE3A affects behavior in people with 15q duplication syndrome by altering the transcription of genes in the nucleus of neurons, Anderson says.

The findings contribute to a larger effort to unravel the complexities of UBE3A, says Scott Dindot, assistant professor of veterinary medicine at Texas A&M University, who was not involved in the work.

“There has been a debate about where UBE3A functions in the cell,” Dindot says.

The protein is found in the nucleus, in the cell body and at synapses, the junctions between neurons. Because other synaptic proteins have been implicated in autism, researchers initially focused on UBE3A’s role at the synapse, but are beginning to take a broader view.

“Is [UBE3A] doing something different at the synapse than in the nucleus? Probably,” Dindot says.

The protein’s location in the cell is only part of the story, adds Benjamin Philpot, associate professor of cell biology and physiology at the University of North Carolina, Chapel Hill, who was not involved in the new study.

For example, mice and humans each make three forms of UBE3A, but these so-called isoforms are not the same across species.

“We need to really carefully think about what different isoforms are doing and how they change over development,” Philpot says.

Dindot’s lab is developing mice that that have duplications of certain isoforms of UBE3A, he reported at the conference.

“We’re working around the clock to characterize these mice,” he says.