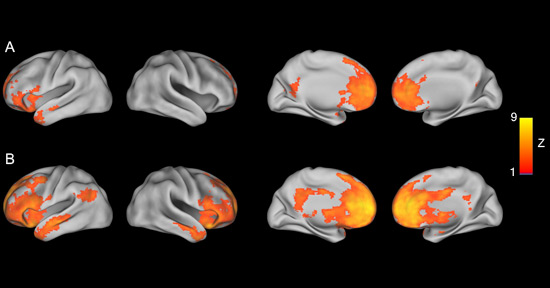 Long links: Children who carry certain common variants in the CNTNAP2 gene (B) have increased connectivity among local areas of the prefrontal cortex, and weaker long-range connections, compared with controls (A).

A pathway involved in language development is increasingly proving to be important in autism, suggest a series of new studies on cellular and behavioral aspects of the disorder.

Reports published in the last year, as well as preliminary data revealed last week at the Society for Neuroscience meeting in Chicago, add heft to the idea that the pathway may cause the language and other problems associated with autism.

In 1990, a letter to Nature described a large, three-generation family from London whose members had severe and distinct deficits in applying grammatical rules, and suggested “one dominant gene” as the cause1. A decade later, geneticists screening the family pinpointed a gene — FOXP2, on chromosome 72 — that is mutated in family members with language impairment.

FOXP2 codes for a protein that regulates the expression of other genes. Last year, an international group of scientists identified one of its targets, contactin-associated protein-like 2 (CNTNAP2). They also found that certain common variants of CNTNAP2 tend to crop up in people with specific language impairment, a developmental disorder3.

CNTNAP2 was an exciting find because three independent teams had recently published that common variants of the gene up the risk of developing autism.

“I think the evidence now that CNTNAP2 is involved [in autism] is quite good,” says leader of one of the teams, Aravinda Chakravarti, professor at the McKusick-Nathans Institute of Genetic Medicine at Johns Hopkins University. “We’re now interested in finding the molecular basis of this.”

In unpublished data, Chakravarti says he’s found that CNTNAP2 is over-expressed in a small number of postmortem brains from people with autism.

Geneticists have discovered many different autism-related variants of CNTNAP2, a massive gene spanning 2.3 million base pairs. “Disruptions in the front end of the gene [usually] mean you’ll get a more severe disorder, like full-blown autism or severe expressive language delay,” notes Martin Poot, research associate professor of medical genetics at the University Medical Center Utrecht in the Netherlands.

In contrast, mutations toward the back end of CNTNAP2 may not lead to a disorder, or could cause Tourette’s syndrome in which, Poot says, people “cannot control their speech and from time to time say all kinds of weird things which they don’t intend to say.”

The front end of CNTNAP2 holds FOXP2 binding sites — suggesting that it’s the combination of disruptions in both genes, and probably others, that leads to full-blown autism, Poot says.

Supporting this idea, this summer Poot’s team identified an 11-year-old boy with autism and speech delay who carries chromosomal deletions and rearrangements in the FOXP2 binding sites on CNTNAP2, as well as in many genes in chromosome 24. The boy is part of a larger study of more than 200 children with autism. So far, Poot has found four children who carry variants in the contactin family of genes.

Several other groups are exploring how the FOXP2 pathway acts in the brain. For example, in one presentation from the conference, researchers reported that adolescents who carry certain common CNTNAP2 variants show abnormal connectivity between brain regions.

The CNTNAP2 protein is involved in cell-to-cell communication and is expressed in frontal-striatal brain circuits, which are important for planning and executive function. But no one knew whether carrying these variants leads to changes in brain activity.

Ashley Scott scanned the brains of 16 high-functioning boys with autism and 16 age-, sex- and IQ-matched healthy controls during a difficult memory task that requires activity in that brain circuit. She also collected saliva samples from the children to see which ones carry the CNTNAP2 variants.

Because the variants are common in the population, most participants — 11 of the children with autism and 12 of the controls — have at least one copy.

Scott, then a graduate student in Daniel Geschwind‘s lab at the University of California in Los Angeles, found that these children have increased connectivity among local areas of the prefrontal cortex.

In contrast, long-range connections between the prefrontal cortex and the posterior cingulate cortex — a region toward the back of the brain that’s part of the frontal-striatal loop — are significantly stronger in the children who do not carry the risk allele. The results hold whether the carriers have autism or not.

“This suggests that contactin may be acting by biasing the brain towards this pattern of connectivity,” says Scott, now a postdoctoral fellow at the Scripps Research Institute in La Jolla, California.

The findings bolster the controversial ‘connectivity hypothesis’ of autism, which holds that the disorder stems from too many connections in local areas of the frontal cortex, and under-connectivity between far-reaching regions.

“It is the connectivity story we started decades ago,” notes Nancy Minshew, professor of psychiatry and neurology at the University of Pittsburgh. “This is the next major advance and this group is leading the way.”

The largest connection in the brain is the corpus callosum, which bridges the two hemispheres. Children on the autism spectrum have decreased volumes of this high-trafficked structure, compared with healthy controls, according to another report published earlier this month5.

Minshew and Antonio Hardan, associate professor of psychiatry at Stanford University School of Medicine, calculated the size of the corpus callosum by analyzing magnetic resonance imaging scans from 22 boys with autism or pervasive developmental disorder. They also found that reductions of certain regions of the corpus callosum correlated with more severe problems in social interaction and repetitive speech.

Hardan notes that the new study on CNTNAP2 is one of the first to correlate brain activity with genetic risk factors for autism. “The application of imaging and genetics is very exciting since it will allow the link of specific genes with structural or functional impairments observed in autism,” he says. “This is particularly important in light of the heterogeneity of the disorder.”

Scott is trying to replicate these findings in a larger sample of children. If the results hold, they could have implications for treating autism.

“We know that the brain is really plastic,” she says. “Maybe this risk gene biases you toward this one pattern, but if you detect it early enough, maybe you can start training, through behavioral or drug therapy, to build up these other connections.”

Other groups are taking a closer look at how the FOXP2 protein itself affects brain cell development — and how that might play a role in autism.

The gene’s role in the disorder is heavily debated. In 2002, geneticists from the Wellcome Trust Center for Human Genetics in Oxford found that FOXP2 mutations underlie speech disorders, and not autism specifically6. But subsequent reports found FOXP2 variations in children with other autism-related rearrangements in chromosome 77, and among people with autism in a Chinese population8.

In a batch of unpublished mouse data presented at last week’s conference, scientists found that FOXP2 is crucial for the early development and migration of inhibitory interneurons, cells that dampen the storm of electrical signals produced by the brain’s excitatory cells.

Interneurons come in more than 20 varieties, and each type is switched on at a precise time and place during development. Disruptions to different types of interneurons could account for the heterogeneous deficits seen in autism spectrum disorders, notes investigator Ian Weaver, a postdoctoral fellow in David Kaplan and Freda Miller‘s developmental and stem cell biology laboratory at the Hospital for Sick Children in Toronto.

Previous work on mice has also shown that disrupting FOXP2 causes structural changes in several brain tissues, particularly the cerebellum, the region that controls movement9. In the new study, Weaver tested FOXP2’s role in brain development — specifically, whether the gene controls how progenitor cells in the embryonic brain turn into different types of mature cells.

Looking at the brain tissue of embryonic mice, Weaver found enriched expression of FOXP2 in the cerebral cortex and the ganglionic eminences, both areas where interneurons are born. In subsequent experiments both in cultured cells and in vivo, he found that FOXP2 tends to be expressed along with known molecular markers of interneurons.

Finally, when Weaver genetically engineered cells in culture and in vivo to curb FOXP2 expression, he observed a dramatic drop in the number of interneurons in these brain regions.

These findings fit nicely with brain imaging data, which have found that people who carry FOXP2 variants and have verbal impairments show increased activity in their cortex10. That could be a sign that the interneurons aren’t keeping the excitatory signals in check.