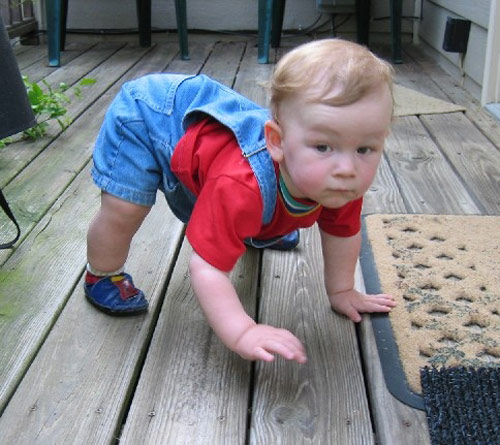 Puzzlingly, motor impairments in autism historically have been neglected, at least in part because they’re not part of the diagnostic criteria for the disorder. In the past year, however, studies of infants who have a higher-than-normal risk of developing the disorder have brought this topic to the forefront.

This work, some of which is unpublished, suggests that children with autism have a range of motor issues — such as head lag, floppy arms and difficulty sitting up — beginning in the first few months of life.

These early motor difficulties could make it difficult for babies to focus their eyes on objects, and, in turn, could hinder reaching movements. “And that makes it harder to get objects and share them with people. So it all kind of cascades,” says Jana Iverson, associate professor of psychology at the University of Pittsburgh. Her work has shown, for example, that children with language impairments have poormotor skills.

Understanding how motor difficulties contribute to autism could also have big implications for designing early interventions.

Simple exercises, such as having parents help their infant hold toys or stand for 15 minutes a day, can lead to substantial gains in the infant’s cognitive development, Iverson says. “If motor problems really are an early sign of potential autism, then intervening in the motor plane might in fact change a developmental trajectory.”

Parents and clinicians have long recorded motor issues, ranging from clumsiness and imbalance to poor finger dexterity, in children with autism. According to some reports, these sorts of problems crop up in as much as 80 percent of children with the disorder2.

Few studies have investigated these skills in infants, however. In one of the first studies, dating back to 1998, researchers analyzed home videos of 17 children with autism and found that the children showed problems at many stages of motor development, from lying on their stomachs to sitting up, crawling and walking3.

But this approach offers only a snapshot of an infant’s behavior. More recently, autism researchers have taken a longitudinal approach, following the same set of infants over many years.

For instance, over the past 20 years, Bernard Karmel‘s group at the New York State Institute for Basic Research in Developmental Disabilities has followed more than 2,000 infants who spent time in the neonatal intensive care unit. Babies are taken to a NICU for many reasons, including premature birth and lack of oxygen, both of which increase the risk of developing autism compared with the general population.

In September 2010, Karmel’s group reported in Pediatrics that at just 1 month of age, babies in the NICU who go on to develop autism tend to move their arms less than other NICU babies of the same gender, birth weight and length of gestation who do not develop the disorder4.

Motor problems could similarly increase the risk of other disorders, says Karmel. “We don’t know yet how exclusive this is for autism.” Still, his group has evidence that babies who go on to develop attention deficit hyperactivity disorder — which shares some features with autism — don’t show the same kinds of early motor impairments.

Another popular approach is to study the younger siblings, or ‘baby sibs,’ of children with autism, who are at a higher-than-normal risk of developing the disorder.

“Delays in motor control are among the first behavioral differences in high-risk infants who go [on] to develop autism,” says Lonnie Zwaigenbaum, associate professor of pediatrics at the University of Alberta in Canada. Zwaigenbaum’s project studies 400 baby sibs, including about 270 who are at least 3 years old.

Iverson is also finding that baby sibs who develop autism are delayed in an array of motor developments. For instance, at 9 months old, they spend a lot of time lying down and are not yet pulling to a stand. Even at 14 months, an age at which many typical babies are walking, they rarely stand up. Most strikingly, she says, the baby sibs who develop autism don’t spontaneously change postures. “Left to their own devices, they just don’t move around as much as other infants do.”

Rebecca Landa has unpublished data showing that at 6 months, baby sibs who later develop social and communication problems, including autism, show a head lag when moving from a lying to sitting position. These findings are slated for publication next year in the American Journal of Occupational Therapy.

“[Head lag] doesn’t seal the baby’s fate, but it’s a warning sign that there’s something in neurodevelopment that isn’t coming along as expected,” says Landa, director of the Center for Autism and Related Disorders at the Kennedy Krieger Institute in Baltimore. “This really makes a difference in the way that I design early interventions for autism.” When teaching toddlers play skills, for example, she says she focuses specifically on improving their motor abilities.

Other researchers are investigating how often these problems appearin older children with the disorder.

In a study of 67families with at least one child who has autism, published 19 October in Autism, John Constantino‘s team reported that motor problems show up in 83 percent of individuals with autism compared with 6 percent of unaffected siblings5.

But none of these sibling studies address whether motor problems cause social problems, or whether the two arise independently in the developing brain.

A series of studies by Stewart Mostofsky, the so-called “motor guru” of autism researchers, suggests that the motor problems stem from abnormal brain connectivity.

In 2009, Mostofsky reported that when learning to control a new tool, children with autism rely on ‘proprioceptive’ information — that is, sensations gleaned from their own joints — rather than on visual information as typical children do6. What’s more, the greater their social and communicative impairments, the more they rely on proprioceptive information.

The brain uses two neighboring regions, the sensory cortex and motor cortex, to encode proprioception. Visual information, by contrast, depends on long-distance connections from the front to the back of the brain. Mostofsky’s data, he says, could be another example of the ‘connectivity theory’ of autism, which proposes that the disorder arises from weak connections between distant brain regions and excessive connectivity between neighboring regions.

In unpublished work, Mostofsky, director of neurocognitive and imaging research at Kennedy Krieger, has found that children with attention deficit do not show the same reliance on proprioception during the tool task.

Mostofsky says researchers should use precise measures of motor problems in autism, rather than relatively crude scales based on checklists of gross or fine motor behaviors. For example, they should test particular movements, such as how children tap their fingers or manipulate objects, he says.

He is collaborating with Landa and other baby sib researchers to look at some of these more nuanced measures in young children.

“It’s not just that there is a general problem with motor control at 6 months of age,” he says. “We’ve got to tease out exactly what is the precise nature and signature of these motor impairments.”