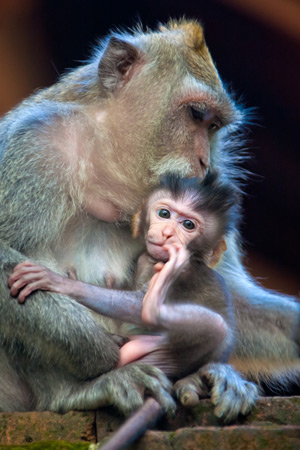 Anton Watman/Shutterstock.com Monkey, do: People’s immune systems and social behaviors are more like those of macaques than of mice.

Monkeys exposed in utero to their mother’s immune response to a mock infection show inflammation in their brains four years later. Researchers presented the unpublished results today at the 2014 Society for Neuroscience annual meeting in Washington, D.C.

Infections during pregnancy have long been known to increase a woman’s odds of having a child with schizophrenia or autism. In the past few years, researchers have confirmed in mouse models that a mother’s immune response can lead to a wide array of symptoms in her pups, such as anxiety, repetitive burying of marbles, and abnormal vocalizations and social interactions.

“There are, however, limitations in relying solely on rodent models to evaluate risk factors for complex disorders such as autism,” says Melissa Bauman, assistant professor of psychiatry and behavioral sciences at the University of California, Davis, who presented the new findings. Mice and men have dramatically different social and communicative behaviors.

Last year, Bauman and her colleagues debuted a macaque model of maternal immune activation: They injected pregnant monkeys with a mock flu virus at the end of either the first trimester or the second. Both groups of young macaques show stereotyped and repetitive movements by age 2, the study found. Babies exposed during the first trimester also show abnormal social behaviors.

“I was surprised how consistently affected the first-trimester animals were,” Bauman says, especially because primate models, unlike mice, are not genetically identical.

The new study investigated the brain activity of the monkeys at four years old, their age of puberty. These experiments relied on an imaging technology called positron emission tomography, or PET, in which radioactive tracers travel from the animals’ blood to their brains and bind to specific proteins.

Bauman’s team used a tracer called PK11195, which binds to activated microglia, cells associated with brain inflammation that have been linked to autism. Monkeys exposed to an infection in either the first or second trimester show abnormally high levels of inflammation across the whole brain, the study found.

In another experiment, the researchers turned to a tracer called FMT, which is a marker of the synthesis of dopamine, a chemical messenger. Increased levels of dopamine in the striatum, a deep brain region involved in planning and movement, are associated with schizophrenia. And rodent models of maternal infection have shown glitches in dopamine cells, Bauman notes.

The new study found that the brains of the monkeys exposed to maternal infection in the first or second trimester show higher levels of striatal dopamine than in controls.

“We’re pretty excited by these data,” Bauman says. The monkey models “are a nice way to bridge the gap between rodent models and clinical populations.”

What these data don’t yet explain, however, is why exposure during the first trimester, but not the second, leads to social problems reminiscent of autism. “At this point, we’re still searching,” Bauman says.