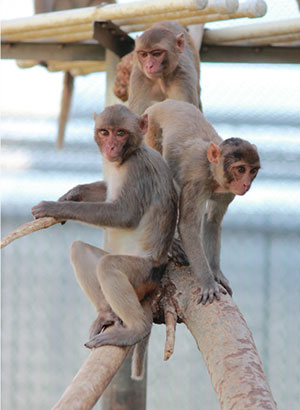 Triggering immune defenses in pregnant monkeys can lead to repetitive behaviors and social problems in their babies, according to a study published 4 September in Biological Psychiatry1.

The finding shores up evidence for the connection between a pregnant woman’s response to infection and the risk of autism or schizophrenia in her child.

Epidemiological studies report that a bout of influenza during pregnancy increases the risk of having a child with schizophrenia and may double the risk of autism. Numerous studies in mice also link maternal infection, or the immune system’s response to it, to abnormal brain development and traits of autism2.

“The significance of this paper is that we’ve taken a tremendous amount of work in mouse models and moved this into the non-human primate,” says lead investigator Melissa Bauman, assistant professor of psychiatry and behavioral sciences at the University of California, Davis.

In the study, pregnant monkeys given a mock flu infection gave birth to babies that later showed stereotyped, repetitive behaviors and seemed to miss social cues.

“These were very important findings — this study looked at behaviors that are seen in children [with autism],” says Alan Brown, professor of clinical psychiatry and clinical epidemiology at Columbia University in New York, who was not involved in the study. Brown led the first studies to show that exposure to influenza, rubella and other infections during pregnancy are risk factors for schizophrenia in the children.

Most women who catch a cold or the flu during pregnancy don’t give birth to a child with autism. It may be that this happens only when a genetic susceptibility combines with a strong immune response at just the wrong point in gestation, says Bauman. “All of this can come together in a perfect storm.” Her study aimed to isolate some elements of the storm, she says.

Earlier this year, Bauman and her colleagues showed that immune molecules called antibodies can alter the brain development and behavior of monkeys exposed to them in the womb. The pregnant monkeys in this study were injected with antibodies from women who have children with autism.

For the new study, the researchers wanted to examine monkey behavior but strip the response down to the body’s reaction alone, using a primate version of a viral mimic they had engineered.

This mimic activates the immune machinery, causing the monkeys to feel feverish, stop grooming and withdraw, says Paul Patterson, professor of biology and biological engineering at the California Institute of Technology in Pasadena.

A total of 6 rhesus macaques received the viral mimic late in their first trimester, 7 at the end of their second trimester, and 11 controls received none. Once the monkeys gave birth, the researchers recorded the babies’ behavior.

When the young monkeys were 6 months old, the researchers briefly separated them from their mothers and observed them. Although the effect was small, the second trimester treatment group made significantly more self-soothing and distress movements, such as hugging themselves and having tantrums, during the separations than the other groups.

By 10 to 22 months old, both treatment groups showed a dramatic increase in stereotyped, repetitive movements compared with the controls, engaging in the movements about five times more often on average.

The researchers tested the monkeys’ social behavior by placing them in a Y-shaped maze with a choice to either stay put in the middle, approach an unfamiliar monkey or move toward an empty cage.

The first trimester group either missed social cues or failed to follow ‘polite’ behavior, in terms of personal distance, significantly more than the others. For example, the monkeys in this group might approach an unfamiliar monkey without hesitation and sit close to it, behavior that is a breach of etiquette.

“I was hopeful that these offspring would show these autism-like behaviors, but I was surprised by the magnitude of the difference,” says Patterson. “It was gratifying, but very surprising.”

The next phase of research should involve following groups of children born to women who had the flu or other infections while pregnant, says Ian Lipkin, professor of pathology and neurology at Columbia University, who was not involved in the study.

“It should be possible not only to determine the extent to which such exposures contribute to autism or schizophrenia,” he says, “but to also identify the responsible microbes.”