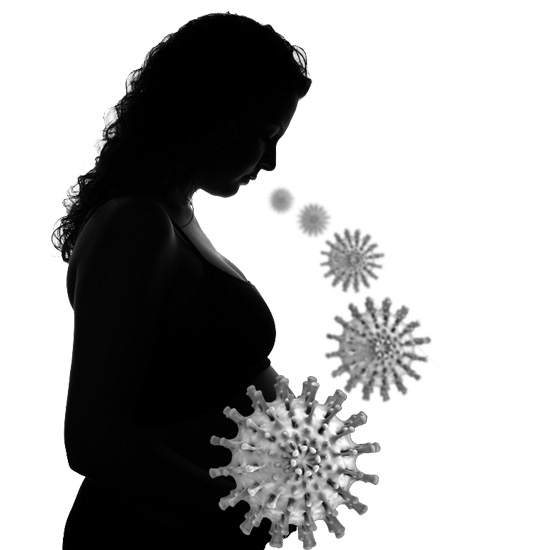 Chemicals produced by a pregnant woman’s immune system may alter the size of several key brain regions in her adult child diagnosed with schizophrenia, according to a study published in August in Schizophrenia Research1.

In particular, the higher the level of an immune molecule called interleukin-8 (IL-8) in a pregnant woman’s blood, the more severe the anatomical changes seen in brain scans of her adult child, the study suggests.

These individuals have larger ventricles, which store cerebrospinal fluids, and smaller areas in the cortex involved in processing emotion and memory.

The findings bolster the emerging idea that infection is one of several maternal conditions — including high emotional stress and poor diet — that can damage the fetal brain, the researchers say.

“We don’t know if it’s just one lesion that occurs in utero and then we’re seeing its effects later on, or if it’s a whole cascade of events that just starts in utero,” notes Lauren Ellman, assistant professor of psychology at Temple University in Philadelphia. “What we are sure about is that individuals with schizophrenia who had these types of prenatal complications have more severe brain abnormalities than those who didn’t have complications.”

Since the 1950s, studies based on birth records, animal data and blood tests have suggested that women who are infected with a virus when pregnant have higher odds of having a child with schizophrenia or autism.

This literature is large and sometimes inconsistent, however. With influenza infections, for example, the findings vary between no risk and a seven-fold higher risk, depending on the study. One review published in March estimates that nearly one-third of all cases of schizophrenia are attributable to maternal infections, including influenza, genital infections and toxoplasmosis, a bacterial infection caused by a food parasite2.

Explanations for the proposed link are “still very much under investigation,” notes Robert Freedman, chair of psychiatry at the University of Colorado.

It’s probably not the virus itself that damages the fetal brain because most viruses can’t cross the placenta. Beginning in 2002, findings from mouse studies have suggested that the culprit is instead the mother’s response to the infection3.

Following viral attack, the immune system begins pumping out troops of chemical soldiers. Some are proteins called cytokines that transmit signals among cells of the immune system. The presence of high cytokine loads in blood is a reliable indicator of a strong immune response.

In 2004, Alan Brown and colleagues at Columbia University screened for four types of cytokines in stored blood samples taken from pregnant women in Alameda County, California, between 1959 and 19674. Ever since, researchers have followed the children born to this famous cohort, with a particular interest in their psychiatric health.

Brown’s study found that mothers of individuals with schizophrenia had higher blood levels of the cytokine IL-8 in their second trimester of pregnancy, compared with women whose children were healthy.

In the new study, Brown and Ellman analyzed magnetic resonance imaging brain scans previously done on 17 children from the cohort after they reached adulthood and were diagnosed with schizophrenia.

The researchers found that those who were exposed to high levels of IL-8 in the womb have abnormally large ventricles. They also have some abnormally small brain regions, specifically the left entorhinal cortex — a part of the temporal lobe that has many connections to the hippocampus, a hotspot for memory — and the right posterior cingulate, a midbrain region involved in processing emotions. Eight healthy controls showed no association between IL-8 exposure and brain structure.

“These are the most consistently found [brain] abnormalities in schizophrenia,” says Jean-Paul Selten, associate professor of psychiatry at Leiden University, in the Netherlands, who was not involved with the work.

The data are particularly strong, he adds, because the researchers showed that the higher the level of the maternal IL-8, the more severe the anatomical changes in the child’s brain. “It’s not necessarily a causal relationship, but it makes the argument more interesting and plausible,” he says.

Many types of infections and other environmental factors, such as obesity and anemia, could lead to higher levels of cytokines, Selten notes. Many of the studies on maternal influenza are based on data showing a surge in schizophrenia diagnoses in people born after epidemics, he adds. In a meta-analysis of these studies published earlier this year, Selten showed that people born in the nine months after the famous ‘Asian flu’ pandemic of 1957 were not more likely to develop schizophrenia5.

Tyrone Cannon, who was Ellman’s Ph.D. advisor, agrees that the data on influenza and schizophrenia risk are not as strong as that for other kinds of infections and prenatal factors, such as low oxygen levels and fetal underdevelopment.

To clarify the link, researchers could analyze umbilical cord blood, which contains fetal cells, rather than maternal samples, says Cannon, director of the Staglin Center for Cognitive Neuroscience at the University of California, Los Angeles. “In the end, it mostly matters what’s happening in the fetal brain.”

Cannon adds that an underlying genetic vulnerability, when triggered by maternal infection, stress or other environmental factors, could lead to schizophrenia via a complicated mechanism.

Ellman is measuring levels of stress hormones in maternal blood samples. Many studies have shown that pregnant women who experience a traumatic event such as the loss of a spouse are more likely to have a child with schizophrenia6. Emotional distress also increases the risk of acquiring an infection, and chronic stress increases the baseline level of cytokines, even in the absence of an infection.

“Women go through many different things during their pregnancies, and most of the time, their babies turn out pretty much okay,” Ellman says. “It seems to only be a portion who are affected by infection or stress, and it’s really unclear why.”