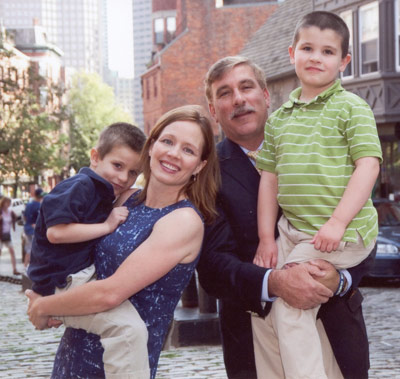 Family portrait: Kate Supple’s sons, both of whom have autism, carry a rare mutation that triggers misfolding of the neuroligin-4 protein.

It’s not often that people get to hear the personal story behind a scientific paper — most scientists, even those studying human genetics, never meet the people they study. And most families never interact with the scientists who analyze their DNA.

That’s not the case for Kate Supple, a mother of two sons with autism, who helped to spearhead a study of her boys.

Supple’s older son, Stuart, was diagnosed with autism in 2005 at age 2. Just a year later, she found out that her second son, Timmy, then 21 months, has autism as well. The children underwent standard genetic tests, but nothing turned up as a likely cause.

“We had two kids with autism one after the other, and no one seemed curious about it,” says Supple, who lives in Natick, Massachusetts.

In 2007, Supple took the boys to get more sophisticated genetic tests at the Center for Human Genetics at Boston University. The testing revealed that both boys carry the same defect in a gene called neuroligin-4 (NLGN4), one of the first genes to be linked to common forms of autism.

Neither Supple nor her husband carries the mutation, suggesting that it arose in the precursors to their egg or sperm cells.

Trying to find out more about the gene online, Supple came across the research of Craig Powell, associate professor of neurology and neurotherapeutics at the University of Texas, Southwestern, in Dallas. Powell had been studying mutations in the related gene, neuroligin-3, also tied to autism.

Supple remembers emailing Powell on Christmas Eve, 2007, asking if he had plans to repeat his work with NLGN4. “He emailed me right back and was intrigued,” she recalls.

Supple helped to broker a collaboration between Powell’s team — which wanted to investigate the impact of the mutation on the cell — and Jeff Milunsky‘s team, which had first detected the mutation in her sons.

The result of that partnership, published in 2009 in the Journal of Neuroscience, is a unique report that includes both an extensive clinical description of the boys and a molecular description of how the mutated protein behaves in cells1.

The researchers showed that cells engineered to carry the mutated gene produce a protein that doesn’t fold properly and gets stuck in a part of the cell called the endoplasmic reticulum. Unlike the normal version of the protein, the mutant form cannot trigger the formation of connections between neurons.

“All of them could have published independently on this mutation,” says Supple. “Instead, they chose to come together and publish together, and it resulted in an excellent piece of work.”

Thomas Südhof, one of Powell’s collaborators on the project, says getting to know the family adds an unusual aspect to the project.

“I think it makes it, in many ways, so much more real,” says Südhof, professor of molecular and cellular physiology at Stanford University in California. “You have a strong understanding of what it actually means when confronted with consequences of a mutation in such a concrete way.”

Having access to extensive clinical information — something lacking in most projects — is also extremely important when trying to interpret the results from molecular studies, says Südhof. “In this case, we have a beautiful connection to the patients.”

In many studies, the researchers only know whether the individuals have an autism diagnosis, with little insight into the various shades of the heterogeneous disorder.

Contact with families is crucial for understanding the complex relationship between an individual’s genetics and his or her symptoms, adds Thomas Bourgeron, director of the Human Genetics and Cognitive Functions Unit at the Institut Pasteur in Paris.

“This will be the challenge for the future of research on [autism],” says Bourgeron. “Nothing will be done if we are still considering individuals as binary categories, affected or non-affected.”

Stuart, now 9, has much milder symptoms than Timmy, 8. Stuart says hello to a visitor, shakes her hand, and practices making eye contact when his mother reminds him.

In contrast, Timmy watches television and doesn’t respond to his mother’s gentle attempts at an introduction. He is also much heavier than his older brother, and the Supples keep a lock on the fridge to prevent his overeating.

Supple continues to follow the latest autism research, and two months ago learned that three labs studying the same strain of NGLN4 mutant mice had observed different social behaviors in the animals. The finding resonated with her, given the stark contrast between Stuart and Timmy.

She contacted Bourgeron, one of the researchers on that study, and volunteered her family for a follow-up project searching for so-called modifier genes. These are genes that may contribute to the varying severity and range of symptoms seen in individuals with the same mutation.

Supple also plans to donate some of her sons’ cells to an effort by Ricardo Dolmetsch, assistant professor of neurobiology at Stanford.

In March 2012, Dolmetsch joined the Allen Institute for Brain Science in Seattle to launch a large-scale program to create stem cells from people with autism and other disorders. (Dolmetsch has a son with Timothy syndrome, a rare genetic disorder linked to autism.)

Dolmetsch first generates stem cells from donors’ skin cells and then differentiates them into neurons. Researchers can then compare gene expression and other factors among cells with a normal copy of NLGN4 and those with the mutation. They can ultimately use the cells to search for compounds that normalize gene expression or other patterns in the mutant cells.

Südhof also continues to study NLGN4, but with a different tack. He aims to engineer the NLGN4 mutation into human embryonic stem cells, which can then be converted into neurons. The Supple boys’ mutation “will be one of our proof-of-concept mutations,” he says.

Cells from Supple’s sons are especially valuable because the mutation has so far been found in only a handful of people.

Supple says she hopes to find more people with mutations in NLGN4, and has become an advocate for genetic testing for people with autism.

“Most people live in places where they don’t even have access to genetic testing,” says Supple. “I don’t understand how research scientists can hope to find an answer when only small percentage of people have been tested.”

In the meantime, she says, she hopes to have her children contribute to more research. “We are in Boston under the nose of all these researchers — I just want someone to see us here waiting and take an interest,” she says. “I have two kids getting bigger and older by the day, and the clock is ticking.”