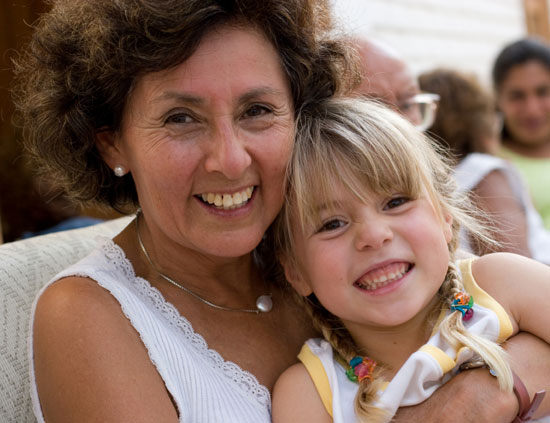 All about the mother: Several upcoming studies shift the focus of autism risk from older fathers to older mothers.

Older women are much more likely to have a child with autism than are older men, but the exact risk varies with the sociological factors in any given year, according to a controversial report published in the September issue of the American Journal of Public Health1.

The prevailing wisdom, based on several high-profile studies, is the opposite: that men older than 40 have up to six times the risk of their younger counterparts of fathering a child with autism, whereas older women have little — if any — increase in that risk. The authors of the new report say that those conclusions are the result of a statistical fluke that exaggerates the real risk for older men.

Previous studies pooled data from several years and, in doing so, neglected to account for rapid sociological changes — such as increasing age of fathers and skyrocketing autism prevalence — in the population during that time, the researchers say. These reports also masked the variability seen in different years.

In contrast, the researchers add, their study evaluates autism risk for each individual year.

“The pooled estimations that inflate risk of older dads on autism create worry amongst people that might not be necessary, and it changes their behavior in response to scientific findings,” says lead investigator Peter Bearman, professor of social sciences at Columbia University. He adds that he published the new study “so people could make better choices.”

The study is one of several that are expected to be published in the coming year that shift the focus from fathers to mothers, highlighting potential non-genetic causes of autism.

The link between parental age and mental disorders first aired in 2001, when epidemiologists analyzed data from comprehensive Israeli national health registries and found that advanced paternal age is a strong risk factor for schizophrenia2.

Five years later, using data from the Israeli draft board registry, the same group showed that children of fathers aged 40 or older are nearly six times more likely to develop autism than those born to fathers younger than 303.

In 2007, Cantor and colleagues found that fathers of children with autism from the Autism Genetic Resource Exchange — a large collection of blood and demographic data from families with autism — are significantly older than a control group of fathers4.

Cantor says she focused on paternal age mainly because of its intriguing biological implications. “At that point, I think that as geneticists, we were all thinking about the mutation rate in fathers.”

Sperm continuously divides and, as it ages, acquires point mutations and large deletions or duplications, some of which have been linked to autism and other psychiatric disorders. Female germ cells can undergo some chromosomal rearrangements, but don’t acquire these mutations.

The factors that could lead to a maternal-age risk — such as longer exposure to potentially harmful substances in the environment, pregnancy complications or increased use of reproductive technologies — aren’t tied as clearly to genetic changes.

In order to get large enough sample sizes, most previous studies combined data from children born over many years, or even decades, and generated a relative risk of developing autism for specific paternal age groups.

When the factors that determine risk change dramatically from year to year, however, this temporal pooling approach can result in a phenomenon that statisticians call ‘Simpson’s paradox.’

In this case, because there have been, over the years, more children with autism in the general population and more men fathering children at an older age, the later years are weighted more in the average — which results in an inflated paternal risk.

The new analysis is the first to compare parental age and autism on a yearly basis, bypassing the pooling problem. Even so, it’s a challenge to tease apart the effects of paternal and maternal age — particularly because older fathers tend to marry older mothers.

Bearman used a statistical ‘decomposition’ technique to separate the risk from mother and father, and found that the risk for each varies greatly from year to year. Overall, although there is a small risk associated with advanced paternal age, it’s much greater for advanced maternal age, Bearman says. “Maternal age is the consistent, non-trivial risk factor.”

Some of the epidemiologists who conducted the earlier reports are skeptical of this particular decomposition, which is not a conventional statistical technique.

“I am not convinced,” says Dolores Malaspina, professor of psychiatry at the New York University Langone Medical Center, and an investigator on both of the seminal Israeli studies. “There is a great societal resistance to seeing paternal age as a risk factor for illness and a long-standing propensity to focus on maternal factors.”

In the Israeli studies, Malaspina and her colleagues had analyzed the ages of the parents of boys and girls separately, and found that the male-to-female bias in autism drops drastically as paternal age increases. Bearman’s study combined data from both boys and girls, which could have obscured the true paternal age pattern, Malaspina says.

Bearman’s study also compares the risk of paternal age over 40 with that of paternal age under 30. Malaspina says the increase in risk begins around age 25, so the lower risk of fathers younger than 25 could be deflating the total. “Had they restricted [the control] to 25 to 29, I’d be more convinced,” she notes.

Although Bearman says that the Israeli study’s finding of increased risk for older men is probably based on the pooling artifact, it’s possible that the discrepancy between the two studies stems from geography, as his analysis used a California data set. “With a different environmental context, you could have a different expression of risk factors,” Bearman says.

On at least one point, the two camps are in agreement: When scientists propose biological mechanisms for the risk associated with parental age, the researchers say, they focus too much on inherited genes, and not enough on factors that affect how genes are expressed.

In 2007, Malaspina argued that the paternal age effect in schizophrenia could stem from epigenetic modifications caused by environmental exposures or errors in DNA methylation5.

“Of course, I am delighted that questions in the area are being perused so that we can uncover the molecular mechanisms and predisposing factors — which I suspect will be epigenetic,” she says.