A tool that relies on video cameras and machine-learning software can identify mice that have mutations in a top autism gene by their behaviors. It also detects how a widely used autism drug affects their movements, a new study has found1.

The work begins to link autism mutations to specific, subtle behavioral changes, and it could help researchers test new or existing drugs for the condition faster and more efficiently.

Historically, to characterize subtle shifts in an animal’s behavior, researchers have had to painstakingly watch videos, frame by frame. The new study relied on a method called motion sequencing (MoSeq), which uses an algorithm to detect discrete behaviors, or ‘syllables,’ from videos without human guidance.

Researchers developed MoSeq in 2015, but this is the first test of its ability to discern the behaviors of different kinds of mice, including animals that model autism.

“We had some idea that MoSeq might be useful because it’s capable of identifying the syllables and grammar out of which behavior seems to be constructed,” says lead researcher and MoSeq creator Sandeep Robert Datta, associate professor of neurobiology at Harvard University.

To put MoSeq to the test, Datta and his team tracked the movements of mice with a mutated copy of the CNTNAP2 gene and control mice. They also tracked how these animals responded to risperidone, a drug used to treat hyperactivity and aggression in people with autism, as well as how control mice responded to other psychotropic medication autistic people commonly take. In total, Datta’s team gathered data on 673 mice.

“A traditional approach definitely is not going to work for high-throughput drug screenings,” says Mu Yang, assistant professor of neurobiology at Columbia University, who was not involved in the work.

But she and others caution that an algorithm may not be able to parse behaviors that seem identical but serve different purposes. For instance, researchers need extensive training to distinguish between a mouse that is frozen in fear and one standing still for some other reason, says Valerie Bolivar, research scientist at the New York State Department of Health’s Wadsworth Center in Albany, who was not involved in the work.

For that reason, MoSeq may be strongest when used in conjunction with more “old-fashioned” observations, she says. “One alone is not as good as maybe the two will be together.” 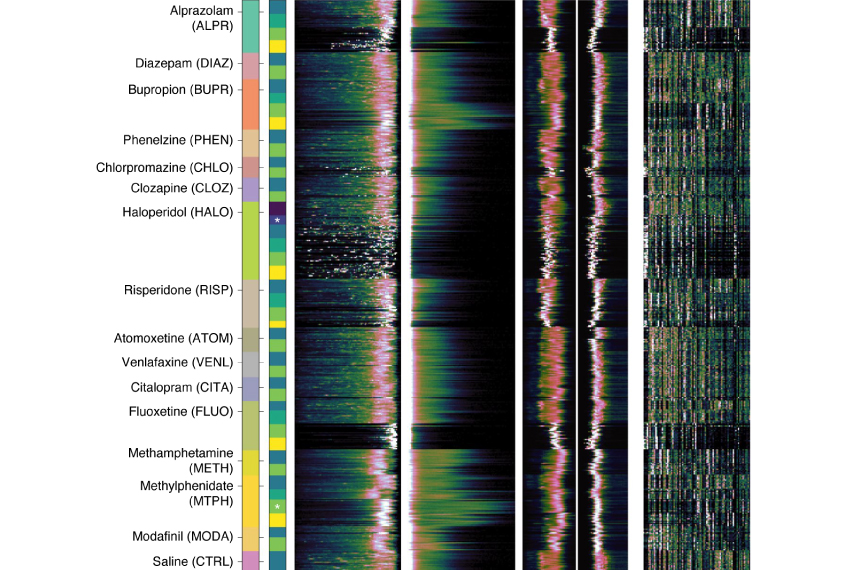 MoSeq uses a depth-sensing camera adapted from the Xbox Kinect motion-sensing device for video games. Situated directly over a mouse’s activity area, it can detect not just horizontal motion and velocity but also vertical movements, such as mice rearing up on their hind legs or bobbing their heads.

Mice with a mutation in CNTNAP2 are hyperactive, according to previous work2. Datta’s team put these mice and control mice one by one into an ‘open field’ — a wide, featureless cylinder — and tracked their behavior with MoSeq. They confirmed the CNTNAP2 mice’s hyperactivity and identified 16 behavioral syllables that are altered in these mice compared with controls.

Seven of these syllables returned to normal after the mutant mice were treated with risperidone. Seven others showed some improvement and two were unaffected.

The team also gave control mice 15 different drugs, including antidepressants and anti-anxiety, antipsychotic and stimulant drugs. Then they used MoSeq to gather data on the mice’s behavior and train the algorithm to identify unique behavioral syllables and sequences. These data effectively categorized which mice had received which drug.

“What surprised us was that it worked so well,” Datta says.

“What the Datta lab’s been doing is a significant advance in the field,” says Ted Abel, professor of neuroscience and pharmacology at the University of Iowa in Iowa City, who was not involved in the work. “I think there’s places to push it as we go forward.” For instance, the study looked only at the short-term effects of drugs in adult mice, he says, whereas some drugs need to build up in an animal’s system, and many are approved for children.

Despite MoSeq’s efficiency, it may not reveal enough about a psychotropic drug’s effects to conclude that compound would work in people.

“You are basically using the behavior as a dial,” Yang says. If two drugs move the dial by the same amount in the same direction, the conclusion might be that they have the same effect in the brain, she says. “For drug screening, that’s fine. It’s probably sufficient and necessary.” But without understanding the neural mechanisms driving the mouse behaviors, translating such screenings to people will be challenging, she says.

Because the technique uses limited observations, and different tests measure different dimensions of a trait, one test may show that a drug lowers anxiety, whereas another may not show any effect, Bolivar says. “Hopefully, they’re willing to move toward doing several assays,” she says.

Datta and his team plan to build on this work by tweaking MoSeq’s machine-vision capabilities to accommodate more varied environments. That will enable them to put the mice through more complex tests. They also plan to measure behavior over longer timescales to capture the effects of chronic exposure to drugs.