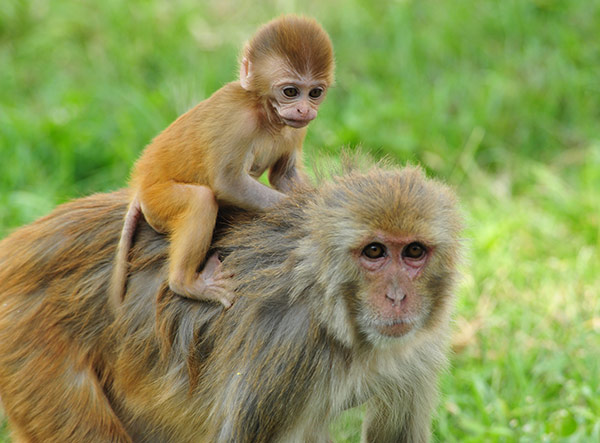 Monkeys whose mothers are infected with a mock virus while pregnant show abnormal branching of certain brain cells. The findings, published 24 March in Brain, Behavior, and Immunity, may help explain why women who get, for example, influenza or rotavirus infections during pregnancy are at increased risk of having a child with autism1.

These findings provide the first evidence that challenging the monkey immune system is associated with changes in the structure of neurons in a brain area implicated in neuropsychiatric diseases, says Melissa Bauman, assistant professor of psychiatry and behavioral sciences at the University of California, Davis, and one of the leaders of the study.

Epidemiologic studies in people have found that infection during pregnancy raises the risk of having a child with autism by up to 37 percent2. Rodent studies have explored the potential reasons for this, finding that chemicals released during the immune response to the infection may trigger brain and behavioral changes reminiscent of those seen in people with autism3.

Bauman and her colleagues extended that work to a primate model. In earlier experiments, they discovered that rhesus macaques exposed to the mother’s immune response in utero show unusually high levels of brain inflammation at puberty. The animals also show repetitive behaviors and social deficits, symptoms similar to those in people with autism4.

In the new study, Bauman and her team injected four pregnant rhesus monkeys with poly I:C — a compound that simulates a viral infection — and four with saline, near the end of their first trimester.

The researchers analyzed the brains of their babies about four years later, equivalent to adolescence in people. They homed in on the dorsolateral prefrontal cortex, a region with roles in cognition and motor planning that is known to be underactive in boys with autism5.

In monkeys exposed to the mock infection, large excitatory neurons called pyramidal cells had an atypical shape: The signal-receiving branches of these neurons, called apical dendrites, were unusually narrow and overly branched. These abnormalities could affect the way the neurons connect and communicate, the researchers say.

The findings add to mounting evidence that the brain abnormalities associated with autism originate in the womb rather than later in life, says Christopher Coe, director of the University of Wisconsin’s Harlow Center for Biological Psychology, who was not involved with the study.

The fact that only a fraction of women who get sick during pregnancy have a child with autism points to additional risk factors, says Patrick Hof, professor of neuroscience at the Icahn School of Medicine at Mount Sinai in New York, who was not involved in the study.