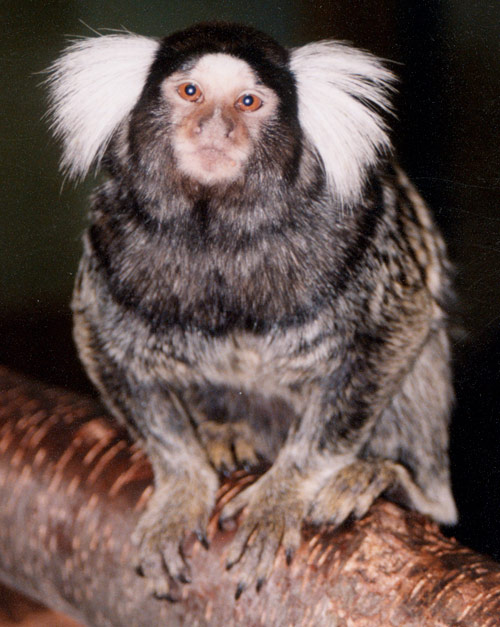 Scientists have created a transgenic monkey modeling Rett syndrome, they announced yesterday at the 2014 Society for Neuroscience annual meeting in Washington, D.C. The model and others sparked a lively discussion about the relative value of animal models in research.

The monkey is a marmoset, a New World species that has a short reproductive cycle and weighs a pound or less. The model lacks MeCP2, the gene that causes Rett syndrome in people, characterized by a sudden loss of language and motor skills in early life.

The researchers are still assessing the animal’s behaviors, but say they are confident primate models will move autism research forward.

“Marmosets, characterized by highly complex social behaviors based on a large prefrontal cortex, will be a major advantage for neuropsychiatric research compared with the studies using rodents,” says Hideyuki Okano, professor of physiology at Keio University in Minato, Japan, who presented the findings.

In 2009, Okano’s team made headlines (and the cover of Nature) when they debuted the first transgenic monkey, a marmoset carrying a gene that makes its cells glow green. And at the Society for Neuroscience meeting in 2012, Okano’s collaborators reported progress on several monkey models of autism-related disorders.

Using a variety of genetic engineering techniques, the researchers have now made 12 kinds of transgenic marmosets, Okano reported yesterday. The various models carry mutations linked to Alzheimer’s and Parkinson’s diseases, amyotrophic lateral sclerosis and Rett syndrome, among others.

To make the Rett model, the researchers injected a zinc-finger nuclease, a protein that acts like molecular scissors, into normal fertilized monkey eggs. The nuclease is designed to snip some of the DNA coding for MeCP2. The researchers then transplanted the modified eggs into surrogate mothers on 31 March. On 18 August, four monkeys were born; one carries a mutation in MeCP2.

In April, a Chinese group reported another kind of monkey Rett model, a transgenic macaque made using a different type of molecular scissors, called a TALEN.

Okano’s talk yesterday spurred a discussion about the pros and cons of the various monkey models, particularly compared with mouse models, which are far cheaper and easier to make.

One audience member pointed out that although transgenic mice have led to a better understanding of the underlying biology of various disorders, “they’ve failed miserably in terms of treatments.” Why, he asked, will marmosets do any better?

“In mouse models, part of the brain is missing: for example, the prefrontal cortex. So the human disease affecting those areas cannot be captured in rodent models,” Okano answered. Marmosets also have rich social lives, he added. “Marmosets make some very nice eye contact. That never happens in macaque monkeys.”

The marmoset brain also has a region that processes pitch, which is similar to the human brain regions that process speech and music, said Xiaoqin Wang, professor of biomedical engineering at Johns Hopkins University in Baltimore.

Wang has studied marmosets for many years. “Without question, the marmoset is a better model than the rodent and macaque when it comes to vocal communication,” he said.

Charles Jennings, director of the McGovern Institute Neurotechnology Program at the Massachusetts Institute of Technology, asked about the notorious difficulty in replicating behaviors of mouse models of disease. “How do you think the marmoset field is going to address that?” he asked.

Animal behaviors tend to be more reliable when a laboratory test is measuring something similar to what the animal would do in the wild, said Partha Mitra, professor of neuroscience at Cold Spring Harbor Laboratory in New York.

“So to the extent that marmoset behaviors are going to be closer to some human behaviors — social behaviors and visual behaviors,” Mitra said, “one would expect better reproducibility for those models.”