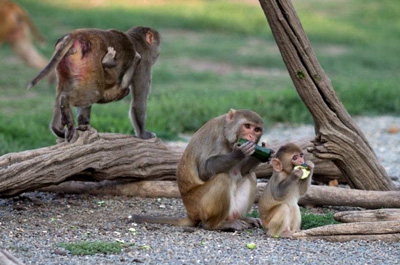 Monkeys living in natural groups show individual variations in social behavior that may help scientists understand autism and identify treatments for the disorder, according to unpublished studies presented at the 2014 Society for Neuroscience annual meeting in Washington, D.C.

Two research groups are studying separate colonies of rhesus macaques using different strategies — one group has homed in on a specific autism-linked pathway while the other team is casting a wider net — but their goals are similar.

Both teams aim to understand how genes influence social behavior in messy, complex social groups such as the ones people inhabit. That’s impossible to capture with mice, but macaques fit the bill.

The monkeys also have an advantage that is usually considered a liability in animal model studies: Every animal is unique in both genes and personality.

“This model has the advantage of best mimicking social deficits in a genetically diverse human population,” says Ozge Oztan, a postdoctoral researcher in Karen Parker‘s lab at Stanford University, who presented her results on Monday.

Parker’s team is studying macaques at the California National Primate Research Center in Davis, California, where animals live in half-acre enclosures for groups of 80 to 120 animals, typical of the size of wild colonies.

Based on social behavior such as play and grooming, she and her colleagues identified the 15 most sociable 2- to 5-year-old males in the colony, as well as the 15 least sociable.

The researchers took samples of blood and cerebrospinal fluid from these animals and zeroed in on markers related to oxytocin and vasopressin, a pair of hormones that influence social bonding. They measured the levels of both molecules and their receptors in the samples.

An additional statistical analysis revealed that the level of vasopressin in the cerebrospinal fluid is the most robust biomarker of sociability in the monkeys.

Eventually, these sorts of clues may help researchers find treatments for the social deficits associated with autism.

The other team, led by Michael Platt at Duke University, is studying a colony of 114 feral macaques on Cayo Santiago, an island off the coast of Puerto Rico. That team observes individual animals for ten minutes at a time, making notes on 55 different behaviors.

“We have an observer standing there all day saying, ‘Oh, there’s a grunt,’” says Jean-Francois Gariepy, a postdoctoral researcher in Platt’s lab, who presented the work Saturday.

Two years of recording grunts, lip smacks and grimaces added up to 300,000 observations, an average of 13.3 hours of monkey business for each animal. The researchers used a computer algorithm to comb through these data in search of associations between different behaviors.

Some of the patterns they identified are unsurprising: Female monkeys act differently when a male monkey is around than when one is not. Monkeys tend to display submissive behaviors such as grooming or making a fear grimace when a more dominant monkey is present.

The researchers were also able to identify some of the quirks of individual monkeys’ behavior. For example, 11 of the monkeys are especially touchy-feely: They tend to groom other monkeys after making or hearing a friendly vocalization. The other 103 don’t show this pattern of behavior.

The researchers plan to conduct similar analyses of other behaviors. “The goal of the project is to take every individual monkey and characterize its behavioral phenotype — how it responds to its social environment,” Gariepy says.

The next step will be to link those features with genetic data. The researchers have analyzed variations in 300 brain- and behavior-related genes among the monkeys in the colony.

In the meantime, Platt’s group also has an eye on oxytocin. In preliminary experiments involving seven lab-housed monkeys presented Wednesday, the team showed that when submissive monkeys inhale oxytocin, they become more confident, looking longer at other monkeys than they did before inhaling the molecule.

Autism isn’t a question of dominance or confidence. But people with autism do have something in common with the submissive monkeys, Gariepy says. “Both show some of the same anxiety about social interaction.”