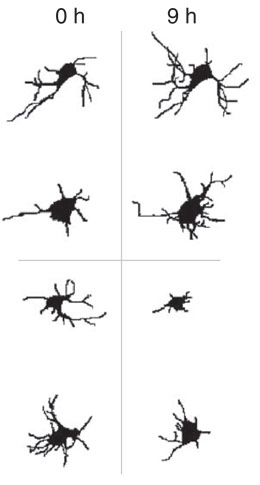 Retraction faction: Branches of neurons from rats that model Timothy syndrome (bottom set of four) shrink significantly after stimulation compared with the branches of control neurons (top set of four), which grow longer and more complex.

Neurons from people with Timothy syndrome, and from mouse and rat models of the disorder, have defects in the growth of dendrites — branching structures that help brain cells communicate — according to a study published 13 January in Nature Neuroscience1.

Timothy syndrome, a rare disorder affecting the nervous system and the heart, is caused by a mutation in the gene CACNA1C. The gene codes for a calcium-pumping channel in the cell membranes of neurons. People with Timothy syndrome often have features of autism.

When healthy neurons are stimulated, dendrites tend to grow longer and form branches — though dendrites are constantly growing and then retracting, the dominant force is toward greater length. Researchers have linked impairments in the growth of dendrites with autism and other neurodevelopmental disorders2.

The researchers found that when they stimulated rat neurons bearing a mutation in CACNA1C, the dendrite arbors shrank in length and complexity, as retraction events outnumbered growth spurts.

They saw a similar effect in neurons grown from induced pluripotent stem cells from individuals with Timothy syndrome. Mice that carry the CACNA1C mutation also have shorter dendrites than controls do.

Calcium channels have shown up in genetic screens for autism before, leading researchers to wonder whether too much calcium in neurons may underlie the disorder’s neurodevelopmental problems.

At least in this case, however, the dendrites are unaffected by the amount of calcium the channel pumps into the neurons, the researchers found. The growth defect stems instead from a cascade of cellular signals set in motion when the channel binds to another protein in the cell.