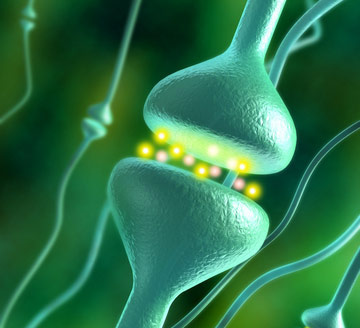 Pathway analysis: A receptor that regulates signaling at synapses, the junctions between neurons, has abnormal protein interactions in mice that model fragile X syndrome.

Pathway analysis: A receptor that regulates signaling at synapses, the junctions between neurons, has abnormal protein interactions in mice that model fragile X syndrome.

Researchers have identified a new mechanism that may underlie a runaway cell-signaling pathway in fragile X syndrome. The results were published 22 January in Nature Neuroscience1.

Fragile X syndrome is caused by a mutation that inactivates the fragile X mental retardation protein, or FMRP, which regulates gene expression by stalling the machinery that translates genetic messages into proteins. Because FMRP silences many genes that are activated by metabotropic glutamate receptors, or mGluRs, researchers are developing fragile X syndrome treatments that block mGluRs.

However, studies also suggest that mGluR activity may be enhanced in individuals with fragile X syndrome through a separate mechanism involving FMRP that is unrelated to its role in regulating gene expression.

In the new study, researchers show that in male mice lacking FMR1, the fragile X gene, mGluR binds preferentially to an altered version of a scaffolding protein, called homer1a (H1A). H1A is a short version of the homer1 protein that permanently activates mGluR signaling.

Homer proteins connect mGluRs with other cell-signaling molecules at the synapse, or junction between neurons, most notably the SHANK3 protein. A SHANK3 mutant disrupts the protein’s ability to bind to homer proteins, leading to autism symptoms in mice.

Deleting the H1A gene in fragile X mice restores mGluR binding to the longer homer proteins and normalizes many of the consequences of overactive mGluR5 signaling, the study found. These include excess protein synthesis in the brain.

Mice that lack both H1A and FMR1 also have fewer seizures and exhibit more typical anxiety levels than FMR1 mutants alone, which tend to be less anxious than controls, the study found.

However, other features of fragile X syndrome are not recovered when H1A activity is inhibited, the study found. These include enhanced long-term depression, which is a dampening of signals at the junctions between neurons after they fire.

This suggests that H1A binding to mGluRs only partially accounts for the role the receptor plays in fragile X syndrome.

However, compounds that modulate the interaction between mGluR and H1A may still be potential therapeutics for fragile X syndrome, the researchers say.