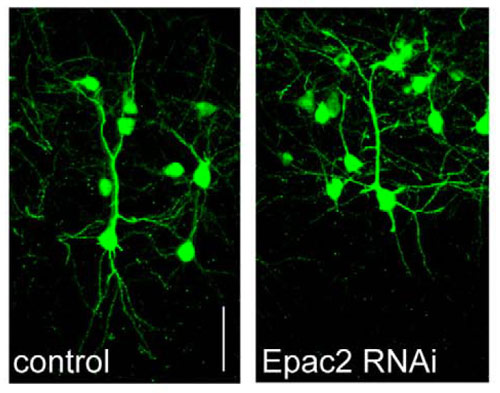 Simple segments: Neurons lacking EPAC2, which is involved in the RAS pathway, have fewer branches (right) than do controls (left).

An autism-linked mutation in the signaling protein EPAC2 alters the shape of neuronal branches, according to a study published in the June issue of PLoS Biology1.

EPAC2, also known as RAPGEF4, regulates the activity of RAP. Both proteins are members of the RAS signaling pathway, which regulates cell growth and metabolism. Studies have linked several proteins in this pathway to autism, strongly suggesting a unifying role for it in the disorder.

Mice with low levels of EPAC2 in their neurons during fetal development later develop neurons with unusually few signal-receiving branches, or dendrites. Cultured neurons with low EPAC2 levels have similar deficits, suggesting that EPAC2 deficiency has similar effects on dendrites at different stages.

Treating cells with a compound that inhibits RAP leads to similar effects on dendrites, implicating RAP in this pathway and in autism.

Interestingly, neurons that have excess levels of EPAC2 with an autism-linked mutation show the same abnormalities as those with too little EPAC2, the researchers found. Studies have found this mutant, called EPAC2-G706R, in individuals with autism2.

Unlike the control version, this mutant protein does not bind to RAP, the researchers found. High levels of this mutant may disrupt the interaction between the control protein and RAP.