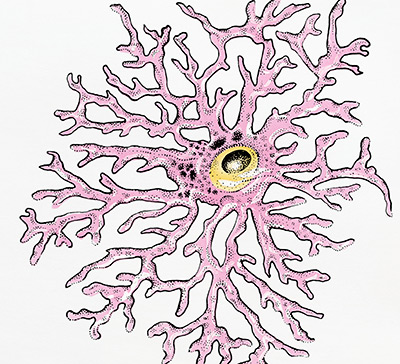 Starring cells: Astrocytes, cells that stabilize the junctions between neurons, may be overrepresented in autism brains.

Brains from people with autism have more support cells called glia and fewer neurons than do control brains, suggests a study published 10 January in Molecular Autism1.

Specifically, the numbers of astrocytes — cells that support the junctions between neurons, or synapses — and microglia, the brain’s immune cells, are both elevated in the prefrontal cortex of people with autism. This brain region is involved in higher-order cognitive function, including social behavior. Astrocytes are also elevated in the cerebellum, which is involved in motor control.

Astrocytes and microglia are both subtypes of glia, which, until recent years, were thought to play a supporting role in brain function. They are now known to help manage the flow of information across synapses.

Deficits in these cells may also contribute to autism: Introducing the mutation that leads to Rett syndrome, an autism-related disorder, in either astrocytes or in microglia is sufficient to lead to many of the disorder’s symptoms in mice. And studies in postmortem brains suggest that these cells look abnormal in brains from people with autism.

Damage to postmortem tissue may alter cell shape, however, making it difficult to interpret these studies. In the new study, the researchers looked instead at the expression of genetic markers specific to astrocytes, microglia and neurons. They looked at tissue from the prefrontal cortex of four people with autism and cerebellar tissue from five people with autism and compared the tissue in each case with that from an equal number of controls.

There are also more astrocytes in the cerebellum of autism brains than in controls: GFAP expression is more than double its level in controls.

In contrast, the neuronal markers NEFL and PVA are dampened in both the prefrontal cortex and the cerebellum in autism brains.

The study is small, but the results support those from previous work. In an informatics study of autism gene expression published in January, for instance, researchers found that genes elevated in autism brains tend to be expressed in astrocytes and microglia2.