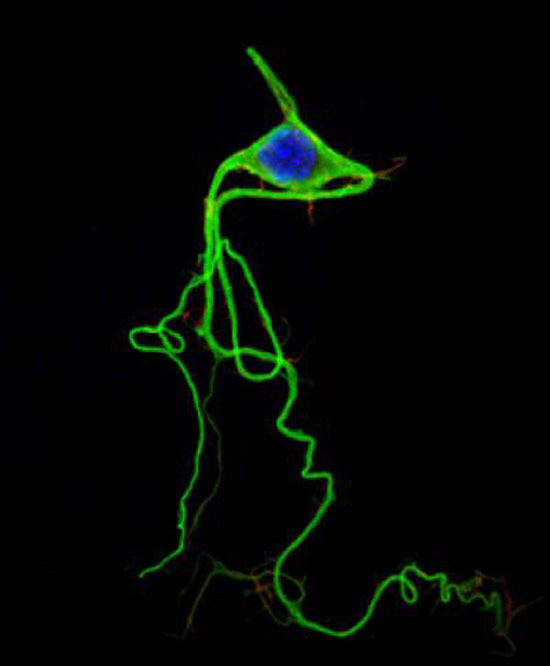 UC San Diego School of Medicine Slow and steady: Soluble proteins travel slowly but deliberately to the tips of neuronal projections that are up to 10,000 times longer than the cell body.

Soluble proteins band together into temporary complexes to travel to the tips of neurons, according to a study published 12 May in Neuron1. The study provides the first evidence-based model for slow neuronal transport, answering a long-standing question in the field.

Neurons are composed of small cell bodies where proteins are synthesized, and long, branching projections, called axons, that are up to 10,000 times longer. Proteins that function at the junctions between neurons, or synapses, located at the tips of axons, are made in the cell body, but need to be transported down axons to do their jobs.

Autism is thought to be the result of improper functioning at synapses, and several synaptic proteins are associated with the disorder.

Proteins move in neurons in one of two ways. One subset of proteins travels via vesicles, or bubbles of membrane, that interact with the cell skeleton and move rapidly down axons. By contrast, soluble proteins, which do not attach to membranes, travel much more slowly, but in a more directed fashion than would be expected by diffusion alone.

In the new study, researchers tagged two synaptic proteins — synapsin 1 and calcium/calmodulin-dependent kinase (CamKlla) — known to travel by the slower method, with a fluorescent marker. The marker, called photoactivatable green fluorescent protein, or PAGFP, lights up only when activated. On its own, PAGFP travels through the cell by diffusion, but when attached to the synaptic proteins, allows researchers to track their location in the cell.

The researchers selectively activated PAGFP tagged to newly synthesized synapsin and CamKlla in the cell body and watched them travel down the axon.

These proteins appear to travel in waves, in both forward and reverse directions, resulting in slow, directed forward movement, the study found. This is different from the movement of either the vesicles or PAGFP alone.

Biochemical experiments showed that the tagged proteins form complexes with other synaptic proteins as well as with some vesicles. The composition of these complexes varies, suggesting that they continuously assemble and disassemble.

Based on these data and on computer modeling, the researchers propose that soluble proteins dynamically form short-lived complexes that are transported for short spurts by the cell’s molecular motors.