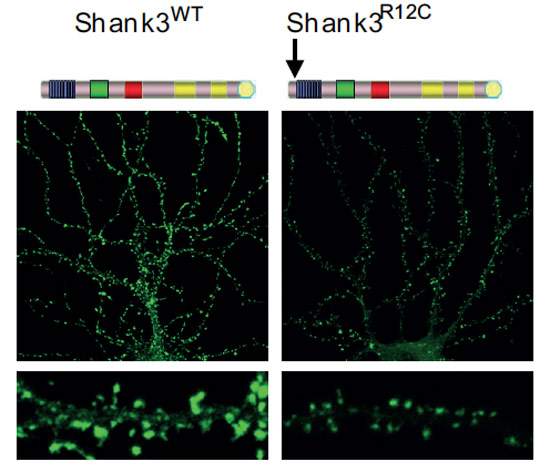 Misplaced mutant: Neurons with a point mutation in SHANK3 (right) show less of the protein at the junctions between neurons compared with controls (left).

Spontaneous and inherited mutations in SHANK3 both inhibit the protein’s role at synapses, the junctions between neurons, according to a study published 24 May in Molecular Psychiatry1.

SHANK3, one of the leading candidates for autism risk, is a component of the post-synaptic density, which helps organize synapses.

In the new study, researchers induced cultured neurons to express an extra copy of the SHANK3 gene. Cells expressing these higher-than-normal levels of SHANK3 show more electrical activity, a marker of the signaling potential of cultured neurons, and make more dendritic spines, the neuronal projections that receive signals. The dendritic spines also have large heads, suggesting that they are more mature.

SHANK3 binds to the tips of actin filaments in dendritic spines, according to the new study. Actin filaments are components of the cell skeleton, and are needed for the formation of new dendrites.

The researchers then replaced the extra SHANK3 copy with one of four SHANK3 mutants identified in individuals with autism.

Three of these are point mutants that substitute a single nucleotide in the ankyrin repeat domain, the same region deleted in one of the SHANK3 mouse models.

All three of the SHANK3 point mutants also increase the number of dendritic spines, but to a lesser extent than having an extra copy of the normal gene does, the study found. Only one of the point mutants slightly enhances spine maturity. About 40 percent less of the mutants bind to actin filaments compared with the normal protein.

The fourth mutation, called STOP, prevents expression of the second half of the gene and has a much stronger effect. This gene makes fewer and less mature spines than cells with normal SHANK3 levels, and has lower electrical activity, suggesting that it inactivates the normal versions of SHANK3. The mutant protein localizes almost entirely around the nucleus instead of in clusters in the cell and at the end of actin filaments, the study found.

The STOP mutation lacks the Homer-binding domain, the same region missing in another of the SHANK3 mouse models. In this model, the mutant protein targets intact copies for degradation through the ubiquitin proteasome system.

The STOP mutation and one of the point mutations have the strongest effect on neuron function, also influencing neuronal development. These are both de novo mutations, arising spontaneously in the egg or sperm. The two mutations that have weaker effects are both inherited.