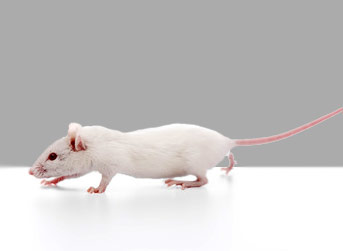 Mice lacking the autism-associated gene SHANK2 show autism-like behaviors similar to those seen in mice lacking SHANK3, another member of the same gene family. But SHANK2 and SHANK3 mice have distinct alterations at neuronal junctions. The results, which were presented at the 2011 Society for Neuroscience annual meeting, were published 29 April in Nature.

SHANK2 and SHANK3 proteins sit at the signal-receiving ends of neurons and help to organize other proteins at synapses, the junctions between neurons. A number of mutations in each SHANK protein have been found in individuals with autism.

Researchers have also engineered several mouse models lacking different regions of the SHANK3 gene. All of these miceexhibit varying degrees of social deficits, repetitive behaviors, such as obsessive self-grooming, and anxiety.

In the new study, researchers created mice lacking either one or both copies of the SHANK2 gene. As with SHANK3 mutant mice, the SHANK2 mice show less interest than controls in other mice and engage in long bouts of repetitive self-grooming. They also have significantly heightened anxiety and hyperactivity, fearing brightly lit corridors and covering twice as much ground as controls do when exploring an open space.

The synapses of neurons from the SHANK2-deficient mice have more NMDA and AMPA receptors, which transmit activating signals to neurons, and more SHANK3 protein compared with controls. By contrast, the synapses from SHANK3 mutant mice have fewer copies than controls do of most versions of these receptors.

Neurons from SHANK2-deficient mice also have fewer dendritic spines, the branches of neurons that receive activating signals, and have weaker excitatory signaling compared with controls.

The results suggest that mutations in different SHANK proteins lead to distinct synaptic alterations that would respond differently to therapies, even though they have a similar effect on behavior, the researchers say.