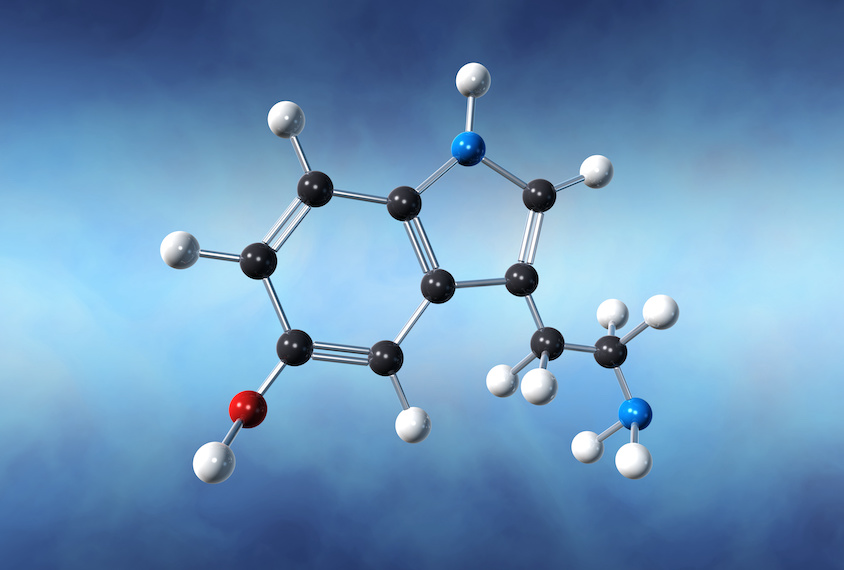 An autism-associated variant in a gene that regulates the chemical messenger serotonin leads to abnormal serotonin regulation and autism-like behaviors in mice. The results were published 3 April in the Proceedings of the National Academy of Sciences1.

Serotonin regulates mood, appetite and sleep, and has been linked to depression. Studies have shown that some individuals with autism have elevated levels of serotonin in the blood. They are also more likely than controls to carry certain rare variants in the SLC6A4 gene, which codes for SERT, a serotonin transporter that recycles serotonin back into neurons after signaling2.

Studies have also found an association between autism and a gene called ITGB3, which may regulate serotonin levels in the blood. Mice lacking the ITGB3 gene have mannerisms resembling the repetitive behaviors and social deficits seen in individuals with autism.

In the new study, researchers engineered mice to carry the gene variant most closely associated with autism in a past study. More of the SERT protein is modified by the addition of a chemical phosphate in these mice than in controls, the study found. This chemical modification is believed to act as a molecular switch that regulates the activity of the serotonin transporter in response to serotonin levels.

Neurons in brain slices from the hippocampus of these mice appear to recycle serotonin more efficiently than do control neurons, the study also found. Because serotonin levels in neurons are known to regulate the sensitivity of serotonin receptors, this could increase receptor activity, the researchers say. In line with this theory, mutant mice are more likely respond to a molecule that activates serotonin receptors — by twitching their heads — compared with controls.

Mutant mice also have elevated levels of serotonin in their blood compared with controls. And serotonin-producing neurons in these mice fire fewer signals more slowly than those from control mice, the study found.

The researchers also investigated autism-like behaviors in the mutant mice. Seven-day-old SERT mutant pups are half as likely as control mice to cry out, with vocalizations inaudible to the human ear, when separated from their mothers. And SERT mutant mice do not show a typical preference for investigating another mouse compared with an object.

The mutant mice do not groom themselves more than controls do or obsessively bury marbles that have been placed in their cages, standard assays for repetitive behaviors. However, they do show a propensity for climbing to the top of their cages, hanging briefly and then returning to the floor. The mice repeat this action about one thousand times in a 24-hour period, the researchers note, suggesting they do have repetitive behaviors.

The results demonstrate the neurobiological effects of an autism-associated variant that regulates the serotonin pathway, and links this mutation with autism-like behaviors in mice.