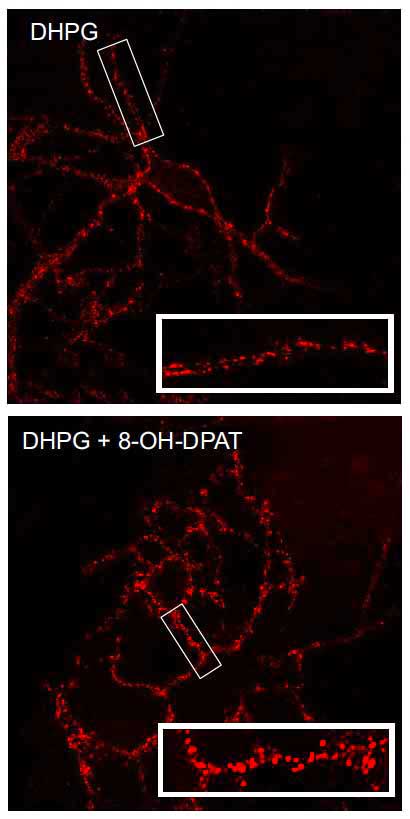 Compounds that target the receptor for the chemical messenger serotonin could help treat fragile X syndrome, according to a study published 17 July in Biological Psychiatry1.

Fragile X syndrome is caused by the lack of FMRP, and the protein’s absence leads to the elevated expression of several genes. Some of these genes are also activated by the mGluR5 signaling pathway. Drugs that dampen the mGluR5 pathway — and so keep the expression of these genes in check — are being tested for treating fragile X syndrome and autism.

Lack of FMRP also influences mGluR5 activity directly, primarily by enhancing long-term depression (LTD). This term refers to a process by which signaling is temporarily repressed after neurons fire.

Serotonin, a chemical messenger that relays signals between neurons, is important for maintaining mood, appetite and sleep. Serotonin has also been implicated in autism.

For example, individuals with autism have elevated levels of blood serotonin. They are also more likely than controls to have a variant of the SERT transporter that lowers its activity. This protein recycles serotonin back into neurons after signaling.

Serotonin is known to inhibit some forms of LTD2. When researchers treat fragile X mice with compounds that mimic serotonin, these inhibit the enhanced LTD in these mice as well.

A family of proteins called AMPA receptors bind to glutamate, a chemical messenger that activates neuronal signaling. During LTD, the cell internalizes AMPA receptors, removing them from the cell surface.

Treating neurons from fragile X mice with compounds that mimic serotonin prevents the internalization of AMPA receptors, the study found. This suggests a mechanism by which the compounds correct LTD in the fragile X mice, the researchers say.