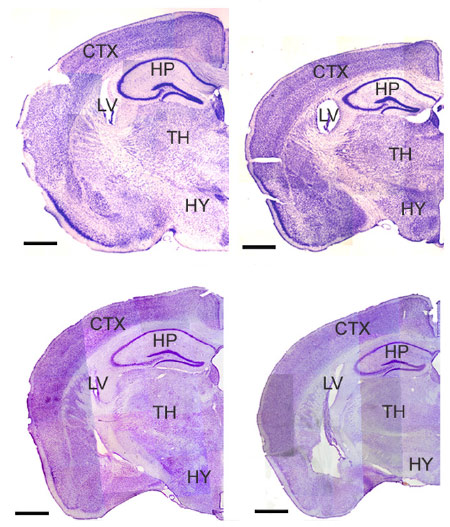 J. Neurosci. Shrinking heads: Turning off MeCP2 expression in mice whether at 5 weeks of age (top, right) or 10 weeks (above, right) leads to smaller brains than those in controls (left).

Deleting the Rett syndrome gene from mature mouse brains leads to the same neurological and behavioral symptoms as deleting it during a key developmental stage, according to a study published 18 July in the Journal of Neuroscience1.

Rett syndrome is an autism-linked disorder characterized by severe intellectual disability and motor deficits. It is typically caused by the loss of one copy of MeCP2, which is located on the X chromosome. Because males have only one X chromosome, the disorder is usually fatal before or shortly after birth in boys. It afflicts girls starting at around 6 months of age.

Because the symptoms of Rett syndrome appear as the brain is still maturing, MeCP2 has been thought to function primarily during brain development. However, studies over the past couple of years have shown that the gene is equally important in adulthood.

In the new study, researchers turned off expression of MeCP2 in 5-week-old juvenile mice, equivalent to the age when symptoms first appear in people, and in 10-week-old mice with mature adult brains.

Within a week, the male mice in both groups begin to show behavioral features of Rett syndrome, such as clasping of the hind limbs, which is reminiscent of the hand-flapping seen in individuals with the disorder. The male mice all die 21 weeks after losing the gene.

In contrast, the female mice in both groups start to show symptoms 16 weeks after MeCP2 loss and do not die prematurely, although a number of them become severely injured as a result of obsessive self-grooming.

Deleting MeCP2 in both juvenile and adult male mice leads to smaller-than-typical brains, with a greater density of neurons that each have fewer branches than control neurons do. These features are equivalent to those seen in mice born with a mutation in MeCP2.

These results suggest that the symptoms of Rett syndrome follow the same trajectory after loss of MeCP2 regardless of age, the researchers say.

However, the process leading to these abnormalities tends to be different for each group. Mice born with the mutation develop small brains, for example, whereas mature mice’s brains shrink after MeCP2 is deleted.

The researchers also found abnormal astrocytes — brain cells that support the function of neurons — in the hippocampus, a brain region involved in learning and memory, of both groups of male mice. A study published last year showed that expressing MeCP2 only in astrocytes in MeCP2-deficient mice alleviates symptoms of Rett syndrome and restores typical neuron shape2.

The researchers also investigated the mechanism underlying these differences. They found lower levels of several proteins that play a role at neuronal junctions in the brains of both juvenile and adult male mice.

Interestingly, although MeCP2 is thought to regulate gene expression by binding DNA, the level of messenger RNA for each of these proteins in MeCP2-deficient mice is similar to that of controls.

This suggests that MeCP2 functions by interfering with the translation of these messages into protein, the researchers say.