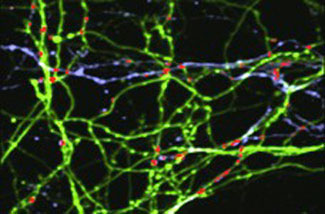 Researchers have developed a technique to detect interactions in live neurons between neuroligins and neurexins — two proteins known to bind at the junction between neurons, according to a study published 29 October in Cell.

Neurons relay information across the brain by releasing molecules, called neurotransmitters, across synapses, the junctions between neurons. Neurexins and neuroligins, which jut out of the transmitting and receiving ends of neurons, respectively, bind to each other on neighboring cells, stabilizing an active synapse.

Researchers induced some live neurons, removed from a rat hippocampus, to express an engineered version of neurexin-1 (NRXN1) that can add a small molecule called biotin to another protein. They then induced other neurons to express a modified form of neuroligin-1 (NLGN1) that has a biotin-receiving domain. When the two proteins bind at a synapse, the modified NRXN1 attaches biotin to the modified NLGN1.

Using this clever technique and a fluorescent dye that binds to biotin, the researchers can look at the live interaction between NRXN1 and NLGN1. They can also detect the number of interactions by quantifying the fluorescent signal.

When the neurons release neurotransmitters, the researchers found, the engineered proteins interact more. This suggests that NLGN1-NRXN1 interactions increase in an active synapse.

Using dyes to distinguish interactions before and after activation, the researchers show that neuron activation increases the amount NRXN1 and NLGN1 at the cell surface. They also show that molecules already at the synapse cycle back into the cell less frequently.

Several proteins in these families, including NRXN1 and NLGN4, have been implicated in autism. The researchers use their imaging technique to show that a known mutation of NRXN1 reduces its interaction with NLGN1. The new technique could similarly allow researchers to visualize synapses in mice with autism-associated mutations in NRXN1 and other synaptic proteins.