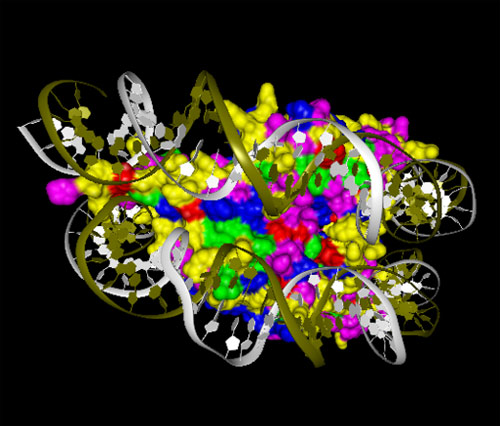 HMGN1, a protein that regulates gene expression, leads to social deficits and hyperactivity when expressed at elevated levels in mice, according to a study published 9 December in the Journal of Biological Chemistry1. This effect may result from HMGN1 dampening MeCP2 expression, the study suggests.

HMGN1 is expressed at higher-than-typical levels in individuals with Down syndrome. The new study suggests that it could also be involved in autism and related disorders.

MeCP2, which is mutated in individuals with the autism-related Rett syndrome, regulates the expression of thousands of genes.

The new study shows that, in the brains of both mice and people, HMGN1 modulates MeCP2 expression: Elevated levels of HMGN1 lead to diminished levels of MeCP2 compared with controls, whereas absence of HMGN1 leads to excess MeCP2.

Mice with excess HMGN1 have better balance and are more active when running around an open field compared with controls. Unlike controls, they also do not prefer to interact with a new mouse over an empty cup, a measure of social ability. However, because the mice run between the two chambers more than controls do, this seeming lack of preference could merely be a sign of their hyperactivity, the researchers say.

By contrast, mice lacking HMGN1 are less active than controls. They also interact more with a mouse than with an empty cup but, unlike controls, show no preference for a new mouse over one they already know.

The researchers also looked at 19 individuals with autism and 52 controls from the Autism Genetic Resource Exchange, a database of families that have more than one child with autism. Family members without autism are more likely than those with the disorder to have large homozygous regions — which are identical on both copies of a chromosome — adjacent to the HMGN1 gene.

This suggests that the expression of the HMGN1 gene differs between individuals with autism and their unaffected family members, making it a possible candidate for an autism risk factor, the researchers say.