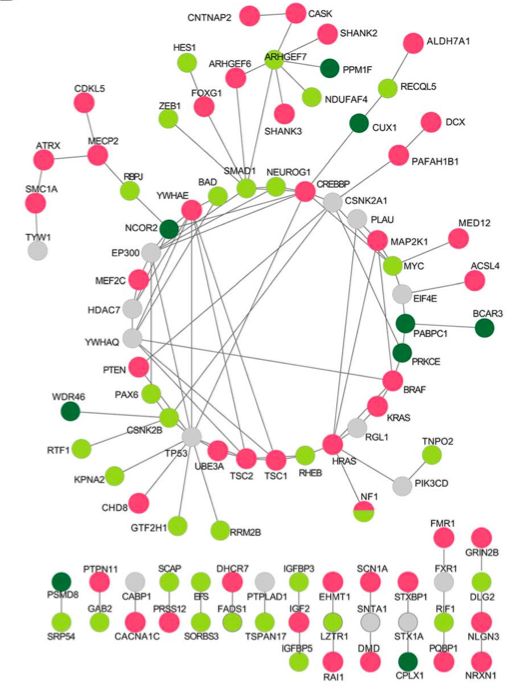 Interaction map: Genes with abnormal patterns of chemical tags in people with autism (green) interact with autism-linked genes (red), such as SHANK3 and MeCP2.

Children with autism have atypical patterns of epigenetic modifications — chemical tags on DNA that influence gene expression, suggests a study published 29 May in PLOS Genetics1.

Identical twins have the same DNA, but can have different epigenetic patterns. When only one in a set of identical twins has autism, for example, the twins tend to have differences in the pattern of methylation in regions that regulate autism-related genes. A study last year found that in postmortem brains of people with autism, the autism-linked SHANK3 gene shows altered methylation.

For the new study, researchers collected cheek swabs from 47 children with autism and 48 controls, all born to mothers who were 35 years or older at the time of delivery.Cheek cells come from the same embryonic lineage that forms the brain. The researchers hoped to detect epigenetic changes that occur early in embryonic development.

The chance of having a child with autism increases as women age, with risk being the highest for women over age 40.Methylation patterns change with age, so the researchers expected this group of children, having inherited their DNA from an older parent, to show atypical epigenetic patterns.

They found that children with autism have slightly different methylation patterns than controls in a small portion of their cheek cells, even when they accounted for factors such as age, sex and ancestry. Many of these differences are associated with genes linked to neurodevelopmental disorders.

For instance, methylation is altered near the gene neurofibromin 1, which when mutated leads to neurofibromatosis type 1, a syndrome associated with autism. They also found altered methylation near genes that interact with autism-linked genes such as SHANK3 and MeCP2, the Rett syndrome gene.

The study did not look at children of younger mothers, so it is unclear whether the epigenetic changes are age-related. The changes may also be the result of environmental factors, such as exposure to toxins during pregnancy, or of mutations in genes that influence epigenetic tags.