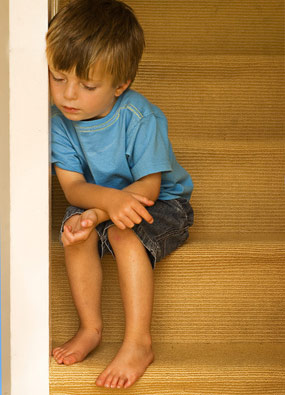 Step back: Children with autism who lose language and social ability at a young age may have deficits in the frontal cortex.

Step back: Children with autism who lose language and social ability at a young age may have deficits in the frontal cortex.

Defects in a signaling pathway that regulates learning and memory could underlie regressive autism, a sudden loss of language or social ability, according to a postmortem brain study published 31 August in PLoS One1.

The study links regressive autism to the frontal cortex, a brain region that is responsible for higher-order cognitive functions, including decision-making and social behavior.

Protein kinase A, or PKA, a molecule that adds a phosphate group to proteins, is one of several that translate signals received at the cell surface into gene expression changes within the cell. Studies had implicated PKA in schizophrenia and other neurological disorders, but not in autism.

A 2007 study showed that levels of phosphodiesterase 4, a molecule that activates PKA, are lower in the postmortem brains from five individuals with autism compared with those from four controls2. PKA also regulates the activity of serotonin-producing neurons, which have been implicated in autism.

In the new study, researchers looked at a measure of PKA activity in the postmortem brains from ten individuals with autism and ten controls. In five brain regions, there are no statistically significant differences in PKA activity in autism brains compared with controls, the study found.

Researchers classified individuals as having had regressive autism if they experienced a significant loss of either language or social ability at a young age. Eight of ten individuals in the autism group had been diagnosed using either the Autism Diagnostic Observation Schedule or the Autism Diagnostic Interview–Revised, the gold standard measures for diagnosing autism.

If possible, the results should be replicated with a larger number of postmortem brains, the researchers suggest.