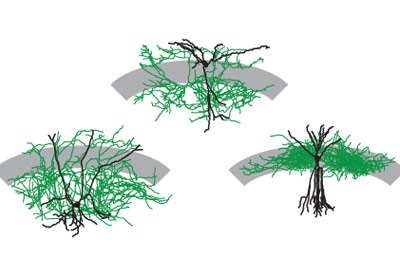 Calming spikes: Oxytocin may modulate the activity of a family of neurons, called fast-spiking interneurons, that inhibit brain activity.

Oxytocin may enhance brain signaling by increasing the strength of the signals and minimizing background noise, according to a study published 4 August in Nature1.

A flurry of studies in the past few years have demonstrated oxytocin’s involvement in several aspects of social behavior, including empathy, trust and bonding. These findings have prompted research into its potential as an autism treatment. Some studies have found that people with autism are more likely than controls to have a common genetic variant in the oxytocin receptor.

In the new study, researchers show that a drug that activates the oxytocin pathway increases the precision of certain neurons, called pyramidal neurons, in mouse brain slices. These neurons stimulate activity in the hippocampus, a brain region involved in memory.

Neurons from a nearby brain region simultaneously activate pyramidal neurons and a second group of neurons, called fast-spiking interneurons, that dampen brain activity. This latter group switches off the pyramidal neurons, allowing only a short spike in their activity. In the presence of the oxytocin-boosting drug, this spike is stronger and cleaner, with less background noise, the study found.