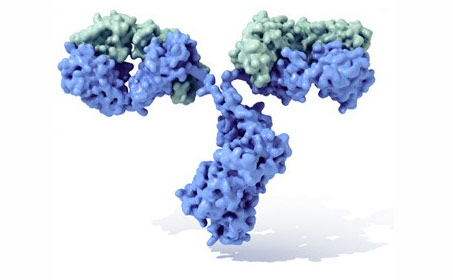 Immune soldiers: Researchers found abnormally low amounts of immunoglobulin G antibodies (above) in newborns who were later diagnosed with autism.

At birth, children with autism have lower blood levels of a class of antibody produced in response to infection compared with healthy controls, according to a report published in December in Autism Research.

Studies since the 1950s have suggested that when a pregnant woman gets the flu, it raises the risk of her child being diagnosed with schizophrenia or autism.

What’s more, when pregnant mice or monkeys are infected with a flu virus, their offspring show behaviors — such as fewer social interactions and exploratory behaviors, and an abnormally sensitive startle response — reminiscent of these disorders. The offspring also have abnormally small brains.

Most research on people has relied on records of the mother’s health or biological samples taken from her during or after pregnancy. In contrast, the new study analyzed archived blood samples from newborns born in California in 1994. Because all the participants are enrolled in the same healthcare system, Kaiser Permanente, the researchers could track which babies were later diagnosed with autism.

Comparing 213 samples from children with autism and 265 samples from controls, the researchers found significantly lower amounts of immunoglobulin G (IgG) antibodies in the autism group. Unlike other types of antibodies, IgG antibodies are transferred to the fetus through the placenta during pregnancy.

Studies looking at blood samples from older children have shown that immune molecules, such as antibodies and cytokines, are often elevated or depleted in individuals with autism and related disorders, pointing to an immune system gone awry.

Because antibodies crop up during an immune response, the new findings do not support the idea that mothers of children with autism are exposed to more infections during pregnancy than are controls.

The data do suggest, however, that autism is linked to some kind of abnormal maternal immune response, such as an inadequate production of antibodies.