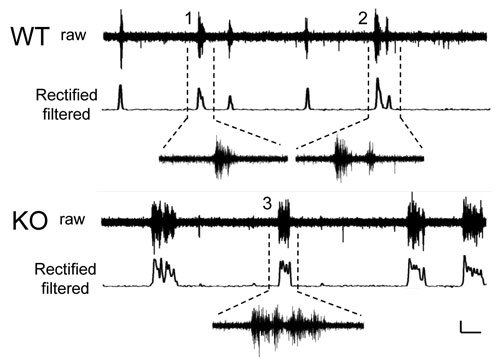 Ready and waiting: Neurons from mice that model fragile X syndrome (above) spend significantly longer in a state in which they’re primed to fire compared with controls (top).

Ready and waiting: Neurons from mice that model fragile X syndrome (above) spend significantly longer in a state in which they’re primed to fire compared with controls (top).

Neurons from mice that model fragile X syndrome may fire signals more readily than those of controls, according to a study published 5 October in The Journal of Neuroscience1. The results suggest a cause for the high incidence of seizures in individuals with the syndrome. They also implicate a signaling pathway targeted by drugs being developed for the syndrome.

Some individuals with fragile X syndrome or autism suffer from epilepsy. They are also very sensitive to sensory stimuli, such as loud noises or flickering lights.

An imbalance between excitatory and inhibitory signals in the brain would explain both of these features, but how the imbalance occurs at the level of neuronal circuits is unclear.

The new study investigates the synchronized firing of neurons in mouse models of fragile X syndrome. Studies have shown that large groups of inactive neurons cycle together between ‘up’ — meaning they are more able to fire if activated — and ‘down’ states.

In the new study, researchers measured these neuronal states in anesthetized live brains and brain slices from mice lacking FMR1, mutations in which lead to fragile X syndrome.

These neurons spend 67 and 62 percent longer in the up state in the live brain and slices, respectively, compared with controls, the study found.

One class of excitatory neurons is activated through the metabotropic glutamate receptor 5, or mGluR5. This receptor turns on the expression of many of the same genes repressed by the fragile X mental retardation protein. Several biotechnology companies are developing drugs that inactivate mGluR5 to treat fragile X syndrome.

Because deleting mGluR5 rescues the prolonged up state in fragile X neurons, mGluR5signaling could be responsible for their excitability, the researchers say. The finding supports inhibitors of mGluR5 as potential treatments for fragile X syndrome.