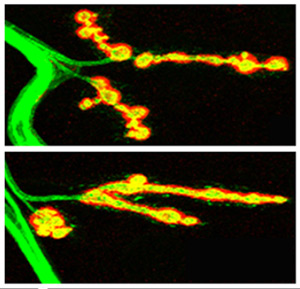 Neuroligin-2 (NLGN2), an autism-linked protein, functions at both sides of neuronal junctions in fruit flies, according to a study published 7 November in The Journal of Neuroscience1. The proteins have only been seen at the signal-receiving ends of these junctions in vertebrates. They are believed to pair with neurexins, which sit on the opposite side of the junction.

A 2003 study first identified mutations in neuroligins — structural proteins that bridge the connections, or synapses, between neurons — in two brothers with autism. Studies have since found mutations in other members of the neuroligin family, including NLGN1, in individuals with autism.

Four studies published earlier this year highlighted the complex role that NLGN1 plays in synapse formation, which may be disrupted in autism.

Neurons in the larvae of these flies have fewer boutons — bubbles of chemical messages that release signals at synapses — than controls do, the study found. They also induce weaker electrical activity in corresponding cells than controls do.

The researchers looked in particular at junctions that connect neurons to muscle cells. Adding dNLGN2 to the mutants restores the correct number of boutons. However, this is not the case if dNLGN2 expression is restricted to either neurons or muscle cells, suggesting that the protein is required at both sides of the synapse.

Studies have suggested that NLGN2 alone may be sufficient to generate synapses. In line with this, expressing high levels of dNLGN2 at both sides of the synapse leads to excess boutons.

However, excess dNLGN2 at just the signal-receiving side leads to fewer synapses, the study found. This may be because too much NLGN2 on one side of the synapse leads to inappropriate interactions that inhibit typical synapse formation, the researchers say.

Mutating both dNLGN2 and the Drosophila version of neurexin (dNRX) has the same effect on synapse formation as either mutation alone, the study found. This suggests that neurexins and neuroligins function together at synapses.

The finding contradicts a 2011 study that showed that the double mutant is lethal, and suggested that NRXNs and NLGNs have independent functions at the synapse2.