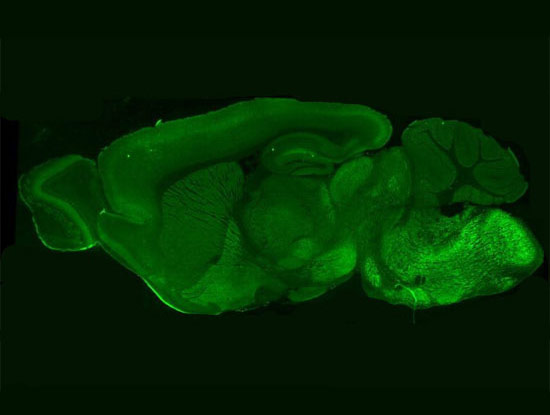 Neuroligin-4 (NLGN4), a protein associated with autism, is located at synapses — the junctions between neurons — that inhibit signals in the brain, according to a study published in February in the Proceedings of the National Academy of Sciences. The protein can also single-handedly induce neurons derived from human stem cells to form synapses, according to another study in the same issue.

Anchored on the receiving end of a synapse, neuroligins bind to partner molecules, called neurexins, which are located on the tip of the neuron sending a signal. This interaction recruits the working parts of a synapse to the region and influences synapse function.

Although NLGN4 mutations found in rare cases of autism suggest that the disorder stems from faulty synapses, it is unclear where NLGN4 normally functions.

The first study found that, in mice, NLGN4 is located at synapses that use glycine, an inhibitory chemical messenger. Some studies have suggested that brain circuits in autism show an imbalance between excitatory and inhibitory signals.

Consistent with this, the retinas of NLGN4-deficient mice show a deficit in glycine-mediated inhibition, according to this study. They have sluggish responses to glycine and abnormal responses to light, although the mice have normal vision.

Beyond the retina, the study found NLGN4-containing synapses in the spinal cord, thalamus and superior colliculus — regions that relay sensory information to the rest of the brain, and which are not typically studied in autism. Distorted signals in these areas could contribute to the sensory abnormalities observed in autism.

Neurons derived from human stem cells can form synapses when grown in the presence of NLGN4 and a related autism-linked protein called NLGN3, according to the second study. By contrast, neurons with autism-linked mutations in NLGN4 and in NLGN3 don’t induce synapse formation.