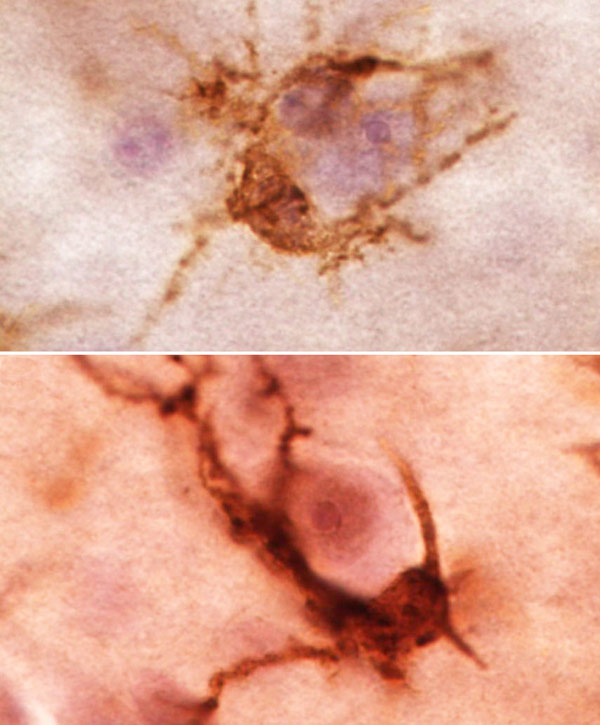 Treating tentacles: More microglia (brown) wrap around the cell bodies of neurons (purple) in the brains of individuals with autism (both panels, above) than in controls.

Two new postmortem studies show that microglia, which protect the brain from invaders, are denser and more concentrated around neurons in the brains of individuals with autism than in those of controls1,2.

Microglia are the immune molecules of the brain, engulfing invading molecules via constantly moving tentacles. Originally thought to merely support neurons, they have since been shown to play more central roles in the brain.

Microglia are located near synapses, the junctions between neurons. More microglia appear around synapses after mice are deprived of light, suggesting that they may be involved in pruning neuronal connections.

A study published in March showed that a bone marrow transplant alleviates most symptoms of Rett syndrome in a mouse model, perhaps by generating healthy microglia.

Postmortem studies have found abnormal microglia in the brains of individuals with autism. For example, a 2010 study showed that 5 of 13 postmortem autism brains have enlarged microglia that are likely to be active in immune function.

The first new study, published 31 March in the Journal of Autism and Developmental Disorders, compared 10 autism brains and 12 control brains. It found that microglia are about 20 percent more dense in two regions of the cerebral cortex, a brain region involved in higher-level cognition, in the autism brains. The researchers presented the preliminary results at the 2009 Society for Neuroscience annual meeting in Chicago.

The microglia are denser than in controls even at 50 micrometers, but this result is not statistically significant. This could be because microglia at this distance are propelled to move even closer to neurons, accounting for the greater increase at 25 micrometers, the researchers say.

The researchers found that three autism brains from children younger than 6 years also have more microglia surrounding neurons when compared with two age-matched controls. This suggests that interactions between microglia and neurons could be a cause and not just a consequence of autism, the researchers say.

The link between abnormal microglia and autism is still unclear. One possibility is that an underlying immune condition activates microglia, which then target neurons and disrupt neuronal connections. Studies have shown that mothers who have antibodies against brain proteins are more likely than controls to have children with autism.

Another possibility is that a mutation affects the microglia directly, causing them to be overactive. This is the case in Nasu-Hakola disease, which causes silly behavior, social inhibition and ultimately dementia.