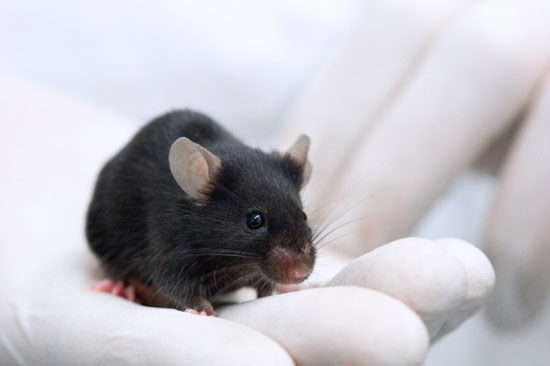 Cute carriers: Mice with DNA repeats in the FMRP gene model the fragile X syndrome pre-mutation, causing some of the symptoms of the disorder.

A partial mutation that leads to a milder form of fragile X syndrome causes deficits in learning and memory in mice, and alters the connections between their neurons, according to a study published in January in Neurobiology of Disease.

When FMRP, the gene for fragile X mental retardation protein, carries more than 200 repeats of a short DNA sequence, there is little to no expression of the protein, leading to fragile X syndrome.

A pre-mutation in the gene — 55 to 200 repeats — is about 20 times more common than the full mutation, and can lead to some of the symptoms of the syndrome.

Mice lacking the FMRP gene are a standard model for fragile X syndrome. In the new study, mice engineered to model the pre-mutation show features similar to those of the full deletion.

The pre-mutation mice are more active than controls, and are more likely to enter brightly lit corridors and elevated platforms, suggesting that they have less anxiety than the controls do. The mice are also slightly less likely than controls to approach a new mouse in their cage, and more likely to forget that entering a dark compartment leads to an electric shock, suggesting deficits in social behavior and in learning and memory.

Neurons in the pre-mutation mice also have immature spines, similar to those seen in the fragile X mice. These changes are in brain regions that play a role in social interaction and learning and memory — the medial prefrontal cortex, the hippocampus and the amygdala.

The results suggest that the mice can be used to study the effects of the pre-mutation in people and help develop drugs.