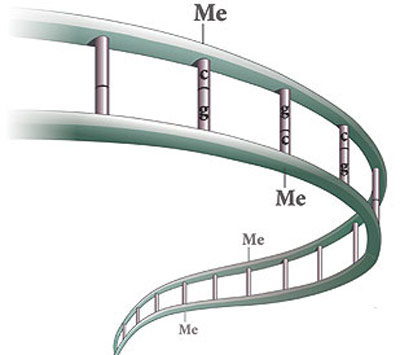 Methyl modifier: Chemical modifications to DNA, triggered by stressors early in life, can have long-term effects on behavior.

Children with autism have fewer DNA modifications that regulate gene expression compared with healthy siblings and controls, and show evidence of DNA damage, according to a study published 26 April in the Journal of Autism and Developmental Disorders1.

Several studies have shown alterations in metabolic pathways in individuals who have autism. These include lower-than-normal levels of glutathione, a molecule that neutralizes chemically reactive oxygen molecules that can damage DNA. Researchers have also found multiple mutations in components of the glutathione pathway in individuals who have autism.

In the new study, researchers analyzed blood from 68 children with autism, 40 healthy siblings and 54 age-matched controls. They found that, on average, the children with autism have high levels of a biomarker that indicates DNA oxidative damage, compared with either the controls or their healthy siblings. The biomarker is 8-oxo-deoxyguanosine, a chemical product of the oxidation of DNA.

Epigenetic changes are chemical modifications of DNA that affect gene expression without changing the primary sequence. Experiences early in life can trigger epigenetic changes that affect brain development and contribute to aspects of cognitive disorders, such as autism and schizophrenia.

For example, mice subjected to stress during a key phase in development give birth to offspring that are less social than normal. These mice also have lower-than-normal levels of methylation in a regulatory region for oxytocin, a hormone that mediates social behavior.

Individuals with autism have been shown to have altered patterns in an epigenetic mechanism called methylation — the direct addition of chemical groups to DNA — resulting in changes in gene expression.