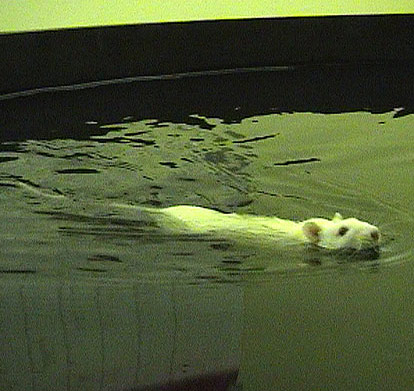 Mega memory: Mice with a mutation in the Rett syndrome protein are more likely than controls to remember the location of a hidden platform in a water maze.

MeCP2, the protein missing in people with Rett syndrome, enhances learning and memory by binding to key genes and either activating or inhibiting their expression, according to a study published 17 July in Nature Neuroscience1. Adding a phosphate group to MeCP2 in response to neuronal activity releases MeCP2 from these genes, the study found.

The study describes an elegant mechanism for MeCP2’s role in synaptic plasticity. This process, which represents the ability to strengthen or weaken neuronal connections in response to experience, is crucial for learning and memory, and disruptions in it are associated with autism.

Boosting cellular levels of MeCP2 enhances learning and memory in mice, but leads to seizures later in their life2. Two mutations in MeCP2 that prevent the addition of the phosphate have the same effect on cells as raising MeCP2 levels does, the new study found.

Mice with these mutations appear to have better memory than controls do: They are more likely to remember the room in which they were previously given a shock and the location of a hidden platform in a water maze. The hippocampus, a brain region involved in learning and memory, is believed to be responsible for these processes.

The hippocampus of the mutant mice is also more likely than that of controls to make strong connections between two neurons after they are activated simultaneously, a process called long-term potentiation.

The hippocampus of MeCP2 mutant mice expresses more BDNF and less mGLuR1 and MeF2C — genes associated with Rett syndrome and autism — the study also found. The MeCP2 mutant protein binds more strongly to the sites of these genes than the control protein does, according to the study.