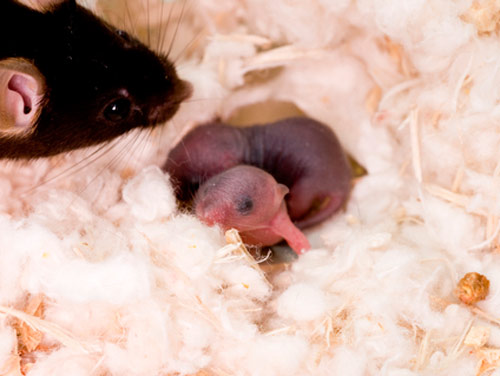 Vulnerable period: Exposing mice to mild stressors during pregnancy can lead to gene expression changes that last for generations.

The male offspring of mice subjected to stress during pregnancy can transmit the effects to their own male pups, according to a study published 26 September in The Journal of Neuroscience1. The results link prenatal stress with neurodevelopmental disorders, such as autism, that are more common in males than in females.

Several studies have shown that maternal stress in the form of infection can lead to changes in brain structure and a higher risk of schizophrenia and autism in children.

Studies in mice have also suggested that testosterone can increase vulnerability to maternal stress. In particular, a 2008 study showed that male mice born to mothers subjected to stress during pregnancy are more sensitive to stress themselves and have gene expression patterns that resemble those of female mice2.

In the new study, the same team extended the results to show that the effects of prenatal stressors, such as the smell of predators or wet bedding, can carry over from these male offspring to males in the next generation. This is particularly true for 13 of 17 genes that are differentially expressed in male and female mouse brains.

Results presented at the 2011 Wiring the Brain meeting in Dublin, Ireland, also show that exposing juvenile mice to stress by separating them from their mother leads to gene expression changes in both male and female offspring that last for at least three generations.

This effect may be mediated by microRNAs, fragments of RNA that regulate gene expression by inactivating the RNA messages that code for protein. The new study found that males in the second generation express three different microRNAs at levels found in the brains of females.

These male mice also have a shorter distance between the anus and the genitalia, a marker of maleness, compared with controls. They freeze for longer than control mice do when suspended by the tail, suggesting that they are more vulnerable to stress.

The results suggest that maternal stress can lead to epigenetic changes — the regulation of gene expression without altering the gene sequence — that can be passed on through generations. Other studies have linked epigenetic mechanisms, including microRNAs, to autism.