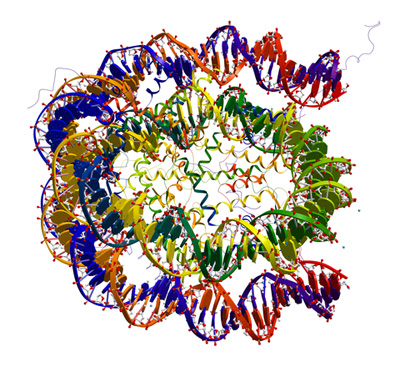 Wind up: DNA wraps around proteins called histones, which can regulate gene expression by controlling how tightly the DNA is wound.

Infection during pregnancy may alter the chemical tags that are added to histones, proteins that form a spool for DNA, according to a study published 9 February in Brain, Behavior and Immunity1. Drugs that target these tags may treat neuropsychiatric disorders, the researchers say.

Epidemiology studies have linked severe infection or illness during pregnancy to an increased risk of having a child with autism. In rodent models, researchers find that stimulating the immune system of a pregnant mouse with a mock virus leads to symptoms in her pups similar to those seen in schizophrenia and autism, such as anxiety and hyperactivity.

In the new study, researchers looked at the effect of maternal infection on the four histones around which DNA is wound. Chemical tags on these histones change how tightly the DNA loops around them, allowing or blocking access for proteins that initiate gene expression.

In particular, the researchers looked at the addition of acetyl groups to two sites on histone H3 and one on histone H4 (H3K9, H3K14 and H4K8, respectively). These modifications are known to boost gene expression.

Young mice that were exposed to a mock infection during gestation behave normally, the study found. Once they reach adulthood, however, they are more anxious and hyperactive than controls.

As juveniles, these mice have less histone acetylation in their cortex than controls do, though the two groups are indistinguishable once mature. This suggests that the histone modifications occur early, leading to symptoms later in life.

The juvenile mice also have lower expression of 8 of 12 genes involved in neuropsychiatric disorders than do controls. The genes include DISC1, which has been linked to both schizophrenia and autism. Histones near the regulatory regions of some of these genes have less acetylation in the juvenile mice than in controls, according to the study.