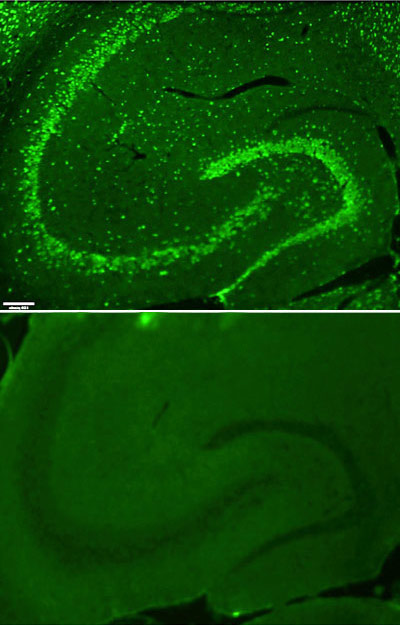 Brain targets: Mothers of some children with autism carry antibodies that attack proteins in the fetal brain (top).

Maternal antibodies that raise the risk of autism when a fetus is exposed to them in utero may lead to elevated head size in the child, according to a study published 8 February in Brain, Behavior and Immunity1.

Women who have certain antibodies that attack fetal brain proteins are thought to be at an increased risk of having a child with autism.

In particular, researchers have identified two rare antibodies that are present in about 11 percent of mothers of children with autism but not in controls. Pregnant mice injected with these antibodies deliver pups that have delays in motor and sensory development.

In research presented at the 2012 Society for Neuroscience Annual Meeting in New Orleans, researchers reported that these antibodies may boost brain size in rhesus macaques exposed to them in utero. Elevated head size, or macrocephaly, is a feature of autism. About 20 percent of children with autism have macrocephaly, although their head size may normalize by the time they reach 4 years of age.

In the new study, the same team looked at 131 preschool-aged boys from the Autism Phenome Project — a large study that catalogs autism symptoms — and 50 controls. Ten of the boys with autism and none of the controls have mothers who carry the two antibodies.