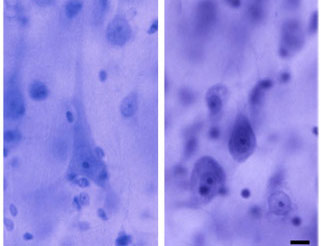 Neurons that activate signals in a brain region important for language and imitation are smaller in the brains of individuals with autism than in those of controls, according to a study published 31 March in Acta Neuropathology1.

Brodmann areas 44 and 45 are part of Broca’s area, a brain region important for language and emotion processing, both of which are affected in individuals with autism. Connections between this region and Wernicke’s area, another language-related region, have been found to be impaired in the brains of people with autism.

Imaging research has also shown deficits in Broca’s area during tasks that involve imitation, suggesting that it may contain mirror neurons, which are thought to fire when an individual watches or performs an action2. Some researchers have suggested that defects in mirror neurons underlie the social deficits seen in individuals with autism.

The brains of individuals with autism have fewer pyramidal neurons in the temporal cortex, which is involved in language processing, compared with controls, according to preliminary results presented at the 2010 Society for Neuroscience annual meeting.

By contrast, the new study found that the number and density of pyramidal neurons are the same in the brains of people with autism and in controls, but the neurons are about 20 percent smaller in autism brains than in control brains. The difference is also more significant among younger brains than among brains from older individuals, the study found.

Small neurons could lead to defects in connectivity with other brain regions, supporting the so-called ‘connectivity hypothesis’ of autism, the researchers say.