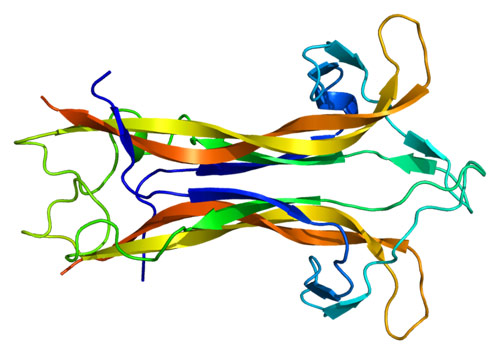 Counter point: An unprocessed version of the growth factor BDNF is overrepresented in autism brains.

The brains of individuals with autism have higher-than-typical levels of the precursor to a neuronal growth factor called BDNF, according to a study published in the April issue of the Journal of Neuropathology and Experimental Neurology1. The results suggest a mechanism for altered brain development in autism.

BDNF, or brain-derived neurotrophic factor, plays a role in the growth and migration of neurons in the brain. It also functions at synapses, the junctions between neurons, and regulates processes that underlie learning and memory. Mice that model Rett syndrome, an autism-related disorder, have lower-than-typical brain levels of BDNF. Studies have also found elevated antibodies against BDNF in the blood of individuals with autism2.

In the new study, researchers looked at levels of BDNF in the fusiform gyrus — a brain region that plays a role in face processing — from the postmortem brains of 11 individuals with autism and 14 controls.

The brains from individuals with autism have the same amount of BDNF mRNA, the genetic message that codes for protein, compared with controls, the study found. However, they have more antibodies that react with BDNF protein than do the control brains.

A technique that detects the amount of actual protein in the tissue shows that there is more of an uncleaved precursor form of BDNF — at 32 instead of 14 kilodaltons — in the autism brains compared with controls. The effects of the precursor are the opposite of the mature protein: Instead of stimulating growth, it dampens formation of dendritic spines, the signal-receiving branches of neurons, and can induce neuronal cell death3.

It also promotes a process called long-term depression, which is a period after neurons fire and before they are ready to signal again. By contrast, mature BDNF promotes long-term potentiation, which strengthens neuronal connections in response to experience and plays a role in learning and memory.

Changes to the balance of the precursor and mature form of BDNF may underlie some of the biological changes in the brains of individuals with autism, the researchers say.