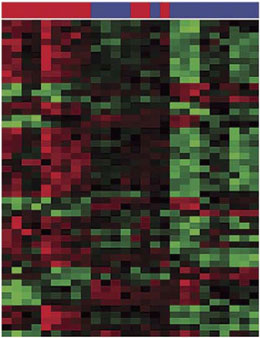 Autism brains express low levels of genes involved in metabolism and in protein assembly, according to a postmortem brain study published 12 September in PLoS One1.

Researchers have identified an increasing number of candidate genes by sequencing the genomes of people with autism. Many of these candidates regulate the expression of other genes.

Studies of postmortem brain tissue have found that entire networks of genes are expressed differently in individuals with autism than in controls. Identifying the pathways in which these genes function may allow researchers to home in on brain mechanisms that underlie autism.

In the new study, researchers looked at gene expression in nine postmortem brains from individuals with autism and nine controls. They looked in particular at Brodmann area 19, a brain region that processes visual information, and at a region of the cerebral cortex that is involved in higher-level functions such as attention and memory.

Overall, 876 genes are expressed differently in the autism brains than in controls. Many of these genes are members of one of two pathways: energy production through the mitochondria, and protein translation — the process that assembles proteins from genetic messages.

Of the 876 genes identified, 32 are expressed at levels that are at least 1.6 times higher or lower than in controls. The list includes four genes that are essential for brain function, and two that code for proteins located at synapses, the junctions between neurons. One of these two genes is the autism candidate synapsin1, which regulates the formation of new synapses.

The researchers also looked at methylation, a chemical modification to DNA that alters gene expression. They did not see any differences in methylation patterns between autism brains and controls.