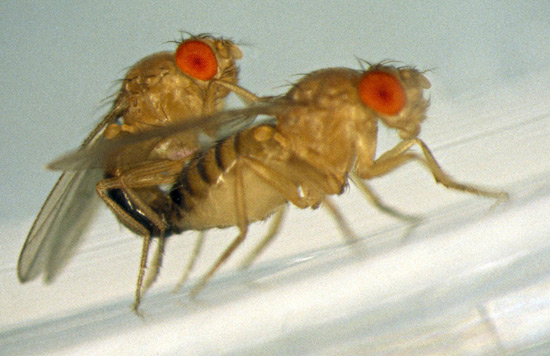 Remembering rejection: An assay based on mating shows dramatic memory loss in fruit flies with mutations in both the presenilin and fragile X genes.

Genes responsible for Alzheimer’s disease and fragile X syndrome — a form of mental retardation linked to autism — may operate through the same pathway, according to a study published in July in The Journal of Neuroscience.

Fruit flies with a mutation in presenilin, a gene linked to inherited Alzheimer’s disease, show long- and short-term memory loss at an earlier age than do controls, the study shows. This effect is even more dramatic — cutting the fly’s age from 30 to 5 days — when the mutation is combined with a second one in the fly fragile X gene, dFMR1.

In this case, each of the mutations was heterozygous — meaning that only one copy of each gene was flawed. Given that, a synergistic effect is rare, notes lead investigator Thomas Jongens associate professor of genetics at the University of Pennsylvania. “This generally indicates that these genes are acting close to one another, more often than not in a complex.”

Drugs that improve cognitive defects in the fly model of fragile X syndrome also delay age-related memory loss in the presenilin mutant flies, further linking the two genes. These drugs reduce the activity of dmGLuRA, a receptor for glutamate whose levels are elevated in both fly and mouse models of fragile X syndrome.

Jongens’ group is investigating whether the shared pathway between fragile X syndrome and Alzheimer’s is also involved in other autism-linked diseases.